Nip slips ahead of the iHeartRadio MMVAs? That’s so very Cavallari. Kristin Cavallari, 31, became the latest victim of the dreaded wardrobe malfunction when she attended the Aug. 26 awards show in Toronto. While her plunging yellow coat dress was a ray of sunshine in the Great White North, it plunged a little too much. As she waited for her turn on the red carpet, something slipped out of place and the reality television star flashed her nipple. Whoops!

Oddly enough, it seems like Kristin predicted her own fate. “I’m literally two seconds away from a nip slip,” she said on her Instagram story ahead of her red carpet appearance, per Cosmo. “It better not happen. I’m gonna ask for tape.” Yeah, do they not have double-sided tape in Canada? Did Donald Trump put an embargo on that, too?

Thankfully, Kristin was able to quickly adjust and put everything back in place right before walking the red carpet. Judging by the smile she showed her adoring fans, she wasn’t bothered a bit by her wardrobe malfunction. Hey, when you look that good – as her dress rightfully landed her on many “Best Dressed” lists — why let a little nip slip ruin your night? Plus, if you can’t flash a little nipple in Canada, what’s the point of the MMVAs, anyway?

Kristin should be feeling on top of the world, since E! renewed Very Cavallari, the docu-series starring Kristin and her husband, Jay Cutler, 35. The second season will continue to follow Kristin’s life in Nashville, especially after opening the Uncommon James store (especially since there may be some lingering, unresolved drama between Kristin and the store’s social media director, Shannon Ford.) While there have been complaints that Jay hasn’t done anything during the first season, first off – it’s not called Very Cutler – and second, he now has a chance to step his reality-TV game up with this new season. 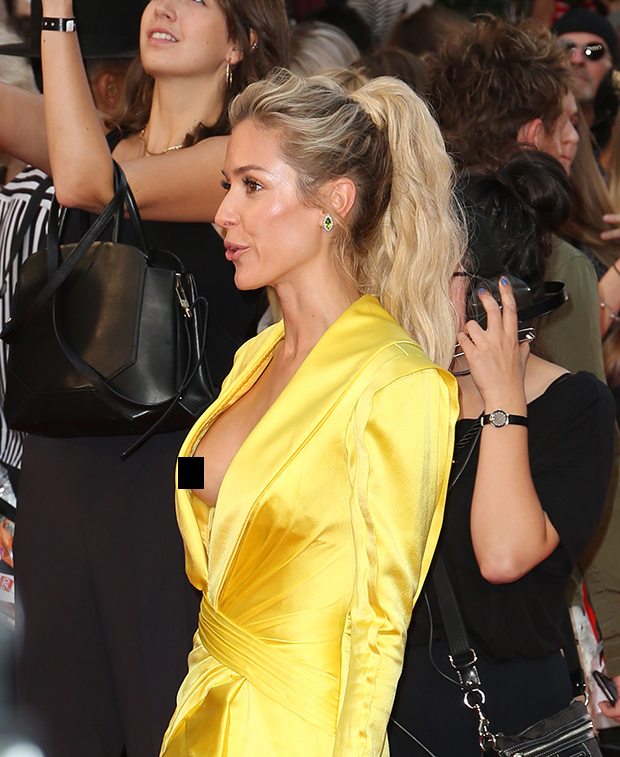 “I couldn’t be happier that Very Cavallari will be returning for season two,” Kristin gushed to E! News. “I had the best time filming our first season and feel like we are just getting started, so I can’t wait to come back for more next year!” The show will return by 2019 with 10 episodes (at an hour apiece, ensuring that everyone will be feeling very Cavallari by the end.)