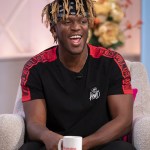 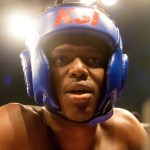 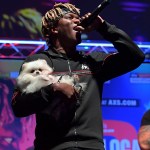 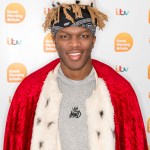 It’s finally going down! The boxing battle between vloggers KSI and Logan Paul takes place on Aug. 25. We’ve got five things to know about the Britain’s biggest YouTube star.

After months of trash talking, heated news conferences and even wig grabbing, YouTube stars KSI and Logan Paul will finally step into the boxing ring against each other on Aug. 25. The long-awaited match is going down in Manchester, England so London-born KSI — real name Olajide William “JJ” Olatunji, Jr. — will at least have the home crowd advantage. Both guys are wildly popular YouTubers, but KSI, 25, is actually an amateur boxer who could unleash some real damage on Logan, 23. These two are just the latest entries into the world of celebrity boxing, and we’ve got five things to know about KSI.

He has over 19 million YT subscribers compared to Logan’s 18M. KSI’s videos has been viewed over four billion times as of August of 2018. He’s Britain’s biggest male internet star and it’s made him a multimillionaire.

2. KSI is an amateur boxer.

He competed in his first celebrity boxing match in Feb. of 2018 against fellow YouTuber Joe Weller. He ended up knocking him out in the third round. The fight was an online smash, getting 21 million live views on YouTube, and another 25 million in the following days. He then called out Logan, whose name had been in the news for posting a video of a dead body in Japan’s suicide forest and other offensive videos that got him temporarily suspended from YT. They agreed to the fight on 24 February, 24, 2018

3. KSI started off vlogging about soccer and gaming.

He launched his YouTube channel in July of 2009, focusing on FIFA football, as well as gaming being a huge fan of Grand Theft Auto V. He became famous enough by 2014 that he was named the face of Sports Relief, a UK charity helping those less fortunate around the world. It provides funds for everything from combatting malaria to mental health treatment.

In addition to his work with Sports Relief, he has donated his time and fame to Save the Children and prostate cancer charity promotions.

He released his first rap song just before Christmas of that year with the tune “Heskey Time,” an ode to British soccer legend Emile Heskey missing out on goals in a video game alongside fellow YouTuber Randolph. His first solo single came in 2015 with “Lamborghini” — KSI owned an orange one by the time he was 21. KSI then released his debut EP titled Keep Up in 2016.