Kendall Jenner, 22, may be younger than Kourtney Kardashian, 39, but her older sis has been looking up to her for years! That’s because Kendall stands crazy tall at five foot ten, while Kourtney is just five foot. But to read about the ten inches between them is one thing — to see their height difference in a side-by-side photo is quite another! And even though Khloe Kardashian, 34, is the same size as Kendall and also close to a foot taller than Kourt, Kendall’s height always seems more shocking thanks to her long legs. The girl is a giraffe, and we mean that in the best way. There’s a reason she’s such a successful model, and she showed that off last night when she wore a black mini dress to Kylie Jenner‘s 21st birthday bash and towered over Kourtney.

Both Kendall and Kourtney were wearing heels when they arrived to the party, standing on the same stretch of sidewalk, but Kendall looked giant in comparison. See the pic for yourself — she almost seems Photoshopped in! But height difference aside, these two have a lot in common and both looked fab. Kourtney had on a mini dress of her own and was sparkling in the strappy purple number and large hoops, and her hair was pulled away from her face just like Kendall’s. Except, well, Kendall’s face was ten inches higher. She’s seriously all legs, so getting a straightforward glimpse of her endless pins next to Kourtney is a little mind blowing. Like, what does it look like when these two hug with flats on? We’re honestly so curious.

But all that aside, all of the Kardashian ladies showed up in style last night with one flawless ‘fit after another. From Khloe’s sequined crop top and matching pants to Kim’s pink cutout dress, we couldn’t pick a fave! 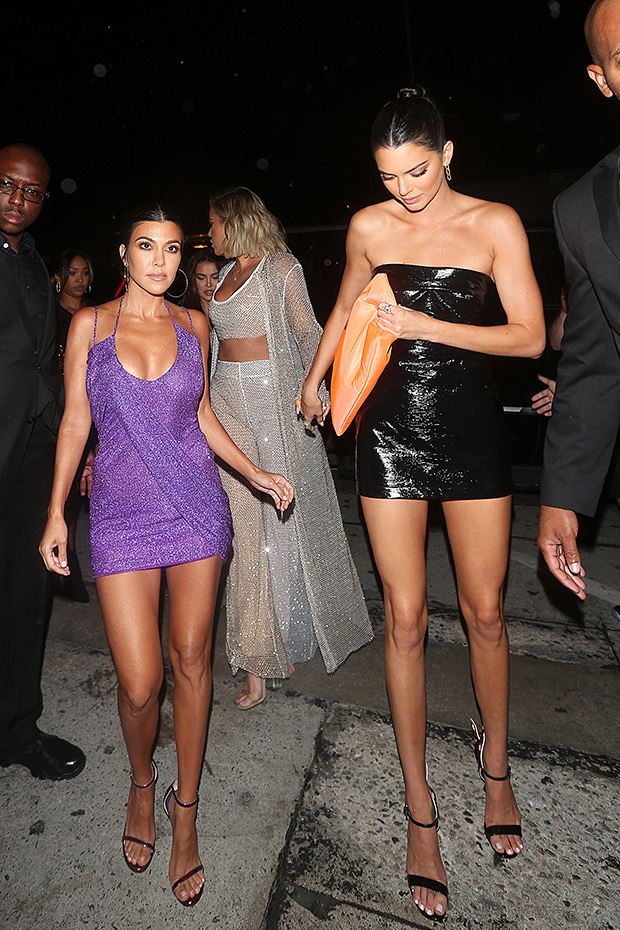 And don’t even get us started on the woman of the hour! She stunned in not one, but TWO lovely looks on her birthday. While Kylie first showed up in a thigh-skimming pink dress and debuted a long blond ponytail, she ended the night in a sparkly jumpsuit that cost a whopping $8,000. Now that’s how you turn 21.