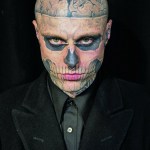 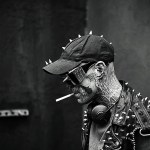 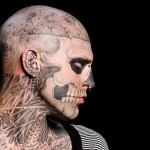 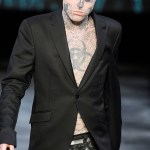 Another young light has tragically been extinguished: Rick Genest, the model, artist and actor known as ‘Zombie Boy,’ is dead from an apparent suicide. As the world mourns, learn more about this wholly unique man.

While many may not have known his name, his face was known across the world. Rick Genest, the Quebec-born man known as “Zombie Boy,” was covered head to toe in tattoos, most notably the skull design on his face. His ghoulish appearance was also very captivating, and his eye-catching appearance landed him work on runways, in music videos and in movies. Sadly, his story came to a tragic end, as Montreal police found his lifeless body inside his Plateau-Mont Royal apartment on Aug. 1, ruling his death as an apparent suicide. While the world will know him for his ink, there was much more to this man than just his tattoos.

Update: Montreal law enforcement sources tell TMZ that Rick jumped from a fourth floor balcony around 5 PM local time. Paramedics reportedly rushed to the scene and performed CPR, but couldn’t revive him. Though the death has been reported a suicide, Rick’s family suspects it was more of an accident. He would smoke on his balcony, often leaning back on the railing, and his family thinks he fell by accident.

Rick’s love of the written word – he loved to write and articulate his feelings through his work – is also why his family think it was an accident, as Rick’s manager, Karim Leduc, said there wasn’t a suicide note.

1. He was obsessed with tattoos from the beginning. Rick, born in LaSalle, Quebec, Canada, grew up in the Montreal punk scene. However, his love of tattooing and altering his appearance started way before his first mosh pit “I grew up fascinated with freak shows and tattoos,” he said in 2016, per The Sun. “Even from age five I used to spend any pennies I had on bubblegum that came with transfer tattoos and stick them up my arms. I’ve always wanted to look different.”

2. Rick’s ghastly appearance sprung from a near-death experience. At age 15, Rick was diagnosed with a brain tumor. “I was told I could die or be left disfigured; I guess this spiraled me into becoming obsessed with the morbid and macabre. As it happened, the operation to remove the tumor went without a hitch, but since then, I’ve known life was too short to not fulfill my dreams of tattoos and body modifications.” After the operation, at age 16, he got his first tattoo – a skull and crossbones on his shoulder.

3. The nickname “Zombie” came long before he was covered in ink. Shortly after his first tattoo, Rick got into an argument with his family and ran away from home. “I just wanted to live life in a bohemian way and travel with a freak show, so I ended up hopping from party to party and sleeping on rooftops in downtown Montreal where I’m from,” he said. “I was then nicknamed Zombie by my friends. When you’re messing around on the streets and getting in trouble, you have a nickname to cover yourself. Zombie came from my love of punk and skulls.”

4. This ghoul worked with Mama Monster, an ex-Zombie rocker and more. In 2006, Rick was featured on BME/News’s ModBlog, and his iconic face tattoo caught the eye of the media. He landed a role in the 2009 TV movie Carny (which was appropriate, as he had worked in various sideshows throughout Canada.) Even though Rick was covered in tattoos (or because of that) Rick came off as a stunning, which launched his modeling career. He worked with Thierry Mugler, and was L’Oreal’s first ever male spokesperson.

He also famously appeared in Lady Gaga’s “Born This Way” music video and worked with Riggs, a former guitarist for Rib Zombie, on a collaborative music project in 2015. Rich also landed a role in 47 Ronin, a movie featuring Keanu Reeves. While Rick was featured heavily in the marketing for the film, he was largely edited out of the final version.

Upon hearing of Rick’s apparent suicide, Gaga said his death was “beyond devastating” and stressed a greater need to “chance the culture” about mental illness. “We must save each other.”

5. The “zombie” in “Zombie Boy” was also a metaphor. Similar to what the late George Romero did in Dawn of the Dead, Rick saw his ghoulish appearance as less a way to celebrate Halloween 24/7, but a statement on modern life. “The zombie concept is also often used as a metaphor for runaway consumerism,” he said in 2012, per The Guardian. “Rebelling from this notion is the very meaning of punk. The origins of the zombie creature came about from stories of people being buried alive in times of plagues and such crises; that would come out the other side ‘transformed’. Zombies, to many, represent a pervasive xenophobia. As in my life, I was often out-casted, hated or misunderstood.”