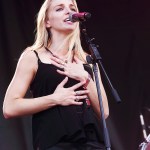 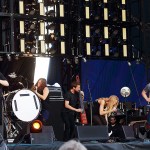 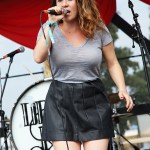 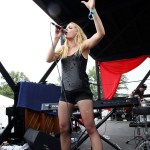 Brittany Hölljes urges you to exercise your right to vote on Nov 6, to send a message that you believe in equality for all people, a clean environment and more. She believes it’s cool to care.

Brittany Hölljes, 24, and her Delta Rae bandmates, Eric Hölljes and Elizabeth Hopkins, tell HollywoodLife.com that they passionately believe that YOUR vote matters, and that if you don’t vote in the midterm elections “there are people who could really be hurt!” Here, Brittany explains why its not just critical to vote in the Nov. 6, midterms elections to save your healthcare, to fight against income inequality and to protect women’s rights. It’s also critical, because its the “patriotic” thing to do.

‘It has always been extremely important to everybody in Delta Rae to be more than just a band that makes music that people enjoy, but to be role models, and people who stand for something and say something with their music. We actually started this band in response to the Great Recession. We were coming out of school with a promise of an American Dream that wasn’t there anymore. We were young, so we voted. There was a chance in that moment to feel really disenfranchised by the economy’s collapse.

For a long time, you heard being parroted out, “Well, your vote won’t matter. This whole thing is already pre-determined. Politics are a joke. It’s for someone else.” That was a lot of the message that was communicated to me growing up. In some way, it was uncool if you cared about it. But, I think it’s so important to impart to young people that it’s really cool to care. — that it actually makes you extremely deep and thoughtful and empathetic, and powerful, and smart, and that is what’s actually cool.

You have to fight that instinct that your “vote doesn’t matter,” especially because there are people who could really be hurt if we don’t vote, and we’re seeing some of that now. We’ve always seen it. It’s not like with every administration, everything changes, and things that were bad get good again. There are persistent problems in our country that we just have to keep on the arc towards goodness.

When you are in a band, or are a celebrity, or you are just a person with a voice, a big step in changing the world is just raising your voice for what you believe in, and that is what voting is —  in a private, personal way. It’s a way of being patriotic, and caring about your fellow countrymen.

There are so many reasons why I vote. One, because I love this country, and I think it is a leader, and the shining star, historically, for leading the path forward, so I want it to continue to do that. The issues for me that are extremely pertinent are things like equality of all people, including racial, gender, sexual orientation, and income. There’s a huge gap in this country, that means a ton of money is sequestered in the top, and it is really making us divided amongst the people who don’t have much, because we’re victims of these people who have it all, and won’t disperse the wealth. I also care very deeply about health care, and wanting to make sure we’re all healthy. I want to especially ensure that women don’t get targeted because we’re women, and have the country or the state invade our rights.

The environment is also hugely important to me. I think that we need to be stewards of the Earth, and this is the one planet we’ve got, really, barring Elon Musk’s colonization of Mars, and we should take care of it. If we did start with some of these systemic issues, we might have less health problems, and we might have less money problems, if the Earth was a little healthier.

I’ll also say, on the point of equality, I am voting for immigration policy, and making sure asylum is available for people who are seeking refuge. We need to stick to the words that are engraved on the Statue of Liberty, and make sure we are a place where people can find opportunity.

If you do anything before the end of the year, this is the main thing… vote. Make sure all of your friends are registered to vote. Make sure your neighbors are registered to vote. They can register right here below using the Rock The Vote registration module. Make sure you talk to your parents about your fears and your concerns. Even if it’s uncomfortable, maybe it will change their minds. Maybe they’ll vote in a way that assures your future. I think that there is a lot of loud backlash to the election of a president who speaks about women the way Trump does, or about people of color the way Trump does, or about immigrants the way Trump does.

There is something really heavy about this midterm. I want to be very hopeful about the turnout, but young people need to see that we’re the adults now. Registering to vote takes five minutes. And showing up to vote, honestly, takes five minutes. We can all talk on social media, or wave our hands and roll our eyes like, ‘I don’t know how this happened.’ This is your generation. This is your legacy. This is your life. We can blame the past generation all we want for climate change, or the fact that the #MeToo  movement is happening now, we can look back and say, “Well shame on all of you for not calling it out sooner,” but the reality is we’re just starting in our own journey of what we’re responsible for, and I definitely don’t want my legacy to be determined by Trump.’

Delta Rae will be registering fans to vote in partnership with Rock The Vote at their upcoming shows. Also, you can listen to their empowering music that offers messages of hope, love, and progress.