Hot damn! All eyes are on Paulina Gretsky as she shows off her rocking bikini bod during her Bahamas vacation! Can you believe she’s a mom of two?! You’ll be so impressed with her washboard abs!

Wowza! Paulina Gretzky, 29, looks absolutely gorgeous and smokin’ hot in her new bikini Instagram from her vacation in the Bahamas! To get in the spirit of the Fourth of July, Paulina showed off her rocking body in a cut-out bandeau bikini top featuring palms, and tiny white bottoms. In the sultry pic, she holds her wet blonde hair in her hand and stands in the stage under a tree in front of a stunning beach backdrop. Using InstaStory gifs, Paulina revealed it was 82 degrees on the island, and used the sticker “BahamaMama!” The daughter of ice hockey superstar Wayne Gretzky also shared a pic of herself the day before, this time in a tiny, hot pink string bikini! “Hotter than you Pink” she captioned the super hot pic, taken by her friend Jeremy Cohen. This is absolutely SI Swimsuit levels! Not to mention, Paulina is a mom to Tatum Johnson, 3, and River, 1 — we need her secret ASAP!

The mother of two recently wished her pro-golfer husband Dustin Johnson a happy birthday with a super cute Boomarang, showing him kissing her on the cheek while they were on a boat. Even though her hubs didn’t win the 2018 U.S. Open, he still stands at the world’s No. 1 golfer and seems to be looking forward to the upcoming British Open and the PGA Championship. However, reports claimed during the Open 2 weeks ago, Paulina and her two friends were confused whether Dustin won the championship or not, and were seen celebrating his putt — which had actually put him in third place. According to NJ.com, one of the three women said, “Did Dustin just win?” as the real winner, Brooke Kopeka sunk in his final putt and cinched him the U.S. title for the second year in a row. 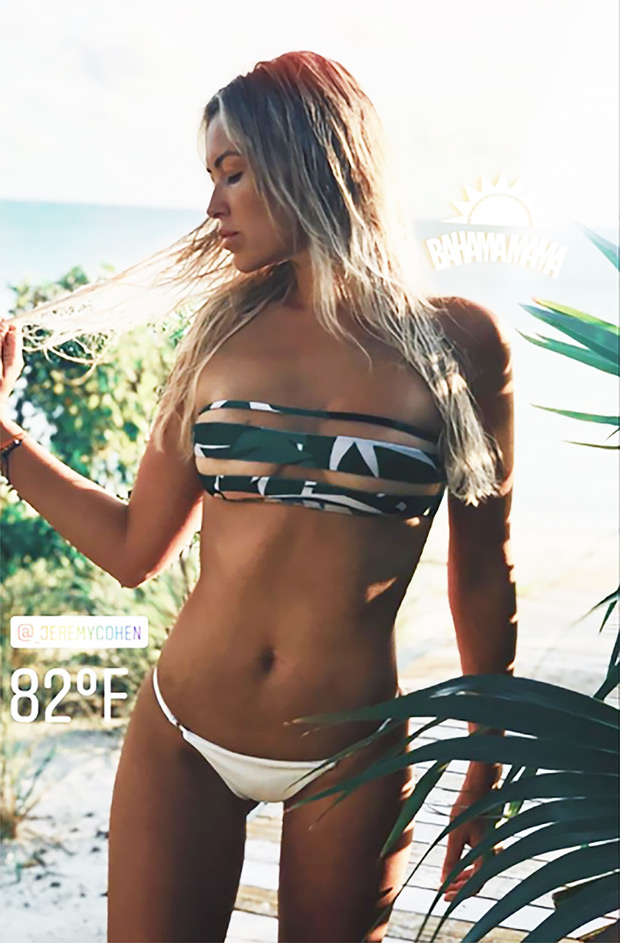 Dustin Johnson didn’t seem to mind, and Paulina shared an adorable photo of the two locking lips on the green, captioned “Always so proud of you..congrats baby.” Aww! And now, they’re celebrating life in the Bahamas — sounds fun!