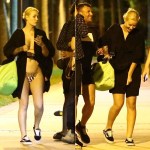 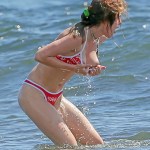 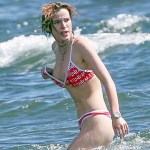 Gigi Hadid nearly spilled out of her incredibly sexy bikini on June 30 while having the time of her life on vacation in Mykonos. Check out pics of the near mishap here!

Ooh la la! Gigi Hadid, 23, was looking her best while on vacation with Emily Ratajkowski, 27, in Mykonos on June 30 when she flaunted some massive cleavage in a sexy hot pink bikini. The gorgeous blonde model was on board a yacht with Emily when she showed off her incredible body and her bikini top was so small that it almost revealed her bare breast! Despite the near mishap, Gigi appeared relaxed while sitting back and sporting some fashionable shades. Emily looked equally as incredible in her own tan and white polka dot swimsuit as she smiled alongside Gigi. Check out the pics of Gigi & Emily here!

In addition to sporting her bikini, Gigi wore a white low-cut polo style shirt and denim shorts over the swimsuit for some of the time. The ladies seemed to take a lot of pics while out on the yacht and even posed for some of them. There’s nothing quite like two models showing off their toned bodies during their summer vacation and that’s exactly what Gigi and Emily enjoyed doing.

This isn’t the first time Gigi flaunted her model bod in a bikini. Whether she’s wearing them for photo shoots or just frolicking on the beach, she always knows how to rock the two-pieces in the best ways. Now that the summer is here, we can’t wait to see more pics of Gigi showing off her cute clothing made to wear in the sun. She never fails to disappoint when it comes to her fashion but we guess that’s expected of a model after all!