Khloe Kardashian, 33, and Tristan Thompson‘s, 27, newborn daughter’s official birth certificate was filed in Ohio on April 19, and as it turns out, she only has two names! The baby girl’s FULL name is simply True Thompson — no middle name whatsoever. As HollywoodLife.com previously told you, True was born in Cleveland, Ohio on April 12. Everything else on the document confirmed what we already know as well, that Khloe and Tristan are her parents, obviously, and that she weighed in at 6 lbs 13 oz and was 21 inches long at birth.

It’s not uncommon for the new generation of Kardashians to not have middle names. In fact, True’s cousins North West, Saint West, Dream Kardashian, Stormi Webster, and Chicago West also only have two names. Many fans thought Khloe would do things differently though and give her daughter both a first AND middle name. Even without a second name though, baby True still has a special moniker, particularly because it’s a family name. Click here to see adorable pics of the Kardashian kid cousins.

“I’m so excited to welcome my precious little granddaughter True!!!” Kris Jenner, 62, tweeted about her grandchild on April 16. “FUN FACT… my Grandfather’s name on my Dad’s side was True Otis Houghton….my real Dad’s name was Robert True Houghton…so i am so excited Khloe named her daughter True!!! #lovebug #familytradition.” 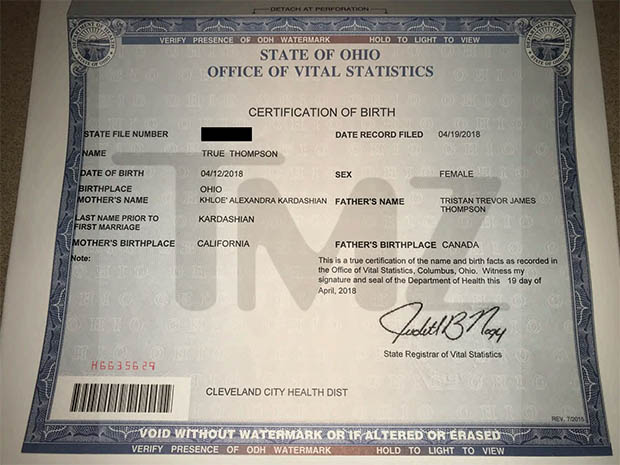 Aside from possibly having a cool middle name, fans also hoped Khloe would give True the Kardashian name rather than the last name Thompson. But as we previously reported, she firmly believes that True needs to have her father in her life no matter what — and that includes following with tradition on the whole name front. Even still though, this doesn’t necessarily mean the reality star has forgiven Tristan for his alleged cheating, which she found out about 24 hours before going into labor.

“Cheating is an absolute deal breaker. Trust in the relationship has been completely lost,” a source close to Khloe told us EXCLUSIVELY last week. “The fact that he cheated on her in front of the world is absolutely heartbreaking and embarrassing and she will never get over it.” Yikes!