Maren Morris, 28, took our breath away when she stepped out onto the ACM Awards stage. She looked like a true golden goddess in a plunging gown with a thigh-high slit to sing her song “Rich.” Her dress shimmered up on stage — we couldn’t take our eyes off of Maren! Her neckline really emphasized her cleavage and that slit showed off her toned legs. WOW! That dress looked like it was worth a million bucks! With her voluminous curly hair and her smokey eye, her sexy look was perfect from head to toe!

Maren turned heads on the ACMs red carpet as well in a separate sexy outfit. She owned the red carpet in a strapless metallic dress. The purple and green sheen popped on the red carpet. Maren just keeps taking her fashion game to new heights! Both of Maren’s ACM Awards looks were dynamite. She also walked the red carpet with new hubby Ryan Hurd. The couple got married in March 2018! What a night for Maren!

The country princess opened the show alongside Jason Aldean, Luke Bryan, Miranda Lambert, and Thomas Rhett to honor the victims of the 2017 Las Vegas shooting at the Route 91 Harvest music festival. Jason was performing at the festival when gunman Stephen Paddock opened fire on innocent concertgoers, killing 58 people in the deadliest mass shooting in modern U.S. history. “For those of us who experienced tragedy and unexpected loss, music helps us remember what really matters in life,” Luke said during the opening. Maren added that music “inspires us, it soothes us and it makes us stronger.” 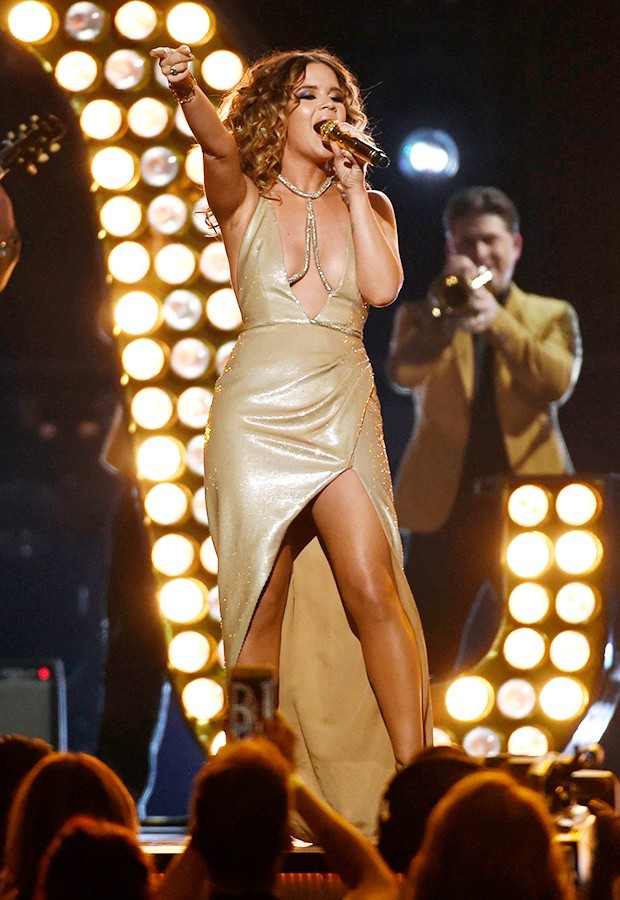 Maren is also nominated for Female Vocalist of the year alongside Miranda, Kelsea Ballerini, Reba McEntire, and Carrie Underwood. If she wins, this would mark her second ACM Awards win!