Looks like there’s another member of the Trump administration trying to leave the White House! President Donald Trump‘s hair nearly flew away on a particularly windy day in Maryland as he was boarding Air Force One. This tends to happen a lot to the president, who swears he doesn’t wear a hairpiece, but this particular incident was truly worse than the rest. See below for truly terrible photos of his hairdo mishap!

We see his hair every day of our lives, and yet Trump (or his stylist?) finds new ways to surprise us. There’s so many layers — figuratively and literally — to his ‘do that we see something new every time. There’s the hair that wraps around his ears. And the fact that most of it lifts completely off his head when facing the gentlest of winds. Then there’s the unmoving bangs. If this really is natural hair, it’s the 8th wonder of the world. If it’s a hairpiece…he needs to hire someone to apply wig glue for him every morning. You see what we mean? Check out that bald spot: 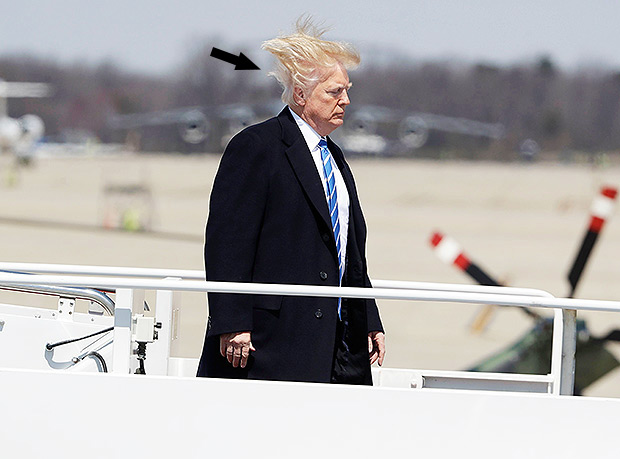 Now, some believe that Trump had a scalp reduction surgery once upon a time. His ex-wife, Ivana Trump, claimed in her divorce deposition that he underwent the surgery, which reduces visible scalp to create the allusion of a full head of hair, in 1989, and it was brought up again in Michael Wolff‘s White House tell-all book, Fire and Fury. That rumor was fueled during another windy day, when his hair lifted to reveal a visible scar on his noggin. We may never know the truth about Trump’s bizarre hair.