Motley Crue drummer Tommy Lee, 55, is sporting a big fat lip and accusing his son 21-year-old son Brandon of giving it to him. The rocker posted the shocking photo to his Instagram account on March 6, showing a close-up look at his mouth and his upper left lip is badly swollen and there appears to be dried blood lining his mouth. He points the finger at his eldest son, writing in the caption “My heart is broken. You can give your kids everything they could ever want in their entire lives and they can still turn against you. Good job Brandon! Great son.” Yikes! He took a ton of heat for the post from fans commenting that he shouldn’t be airing his family problems so publicly, and he then deleted the post.

TMZ reports that a beef did go down between father an son, but their sources allege that Tommy was drunk and that Brandon acted in self defense. So far the young model hasn’t responded to the claim on his Instagram account, as his last post was a selfie  on March 4 where he was dressed in a tux with the caption “Good evening.” Concerned fans have been filling up that post with comments and questions about what went on between him and his dad.

The L.A. County Sheriff Department PIO tells HollywoodlLife.com that officers responded to Tommy’s Calabasas home on March 5 and “the call was a possible battery report, ambulance & fire was dispatched. The disturbing party punched the father in the face and the disturbing party has access to firearms and it was unknown where the firearms were at. A battery report was taken and there is no indication that someone was arrested. No names are available at this time and the report is an active case…it is actively being investigated.”

. The Blast reports that the LA County Sheriff’s department was called to Tommy’s Calabasas home on the night of March 5 about an assault and the LA County Fire Department ended up coming and taking him to the hospital to get treated for his injury.

Tommy’s busted lip and brawling accusations come three days after his ex wife and Brandon’s mom Pamela Anderson, 50, did an interview with Piers Morgan, 52, where she discussed her ex’s 1998 assault on her, which he pleaded no contest to and served six months in jail. The musician took to Twitter on March 5 and lashed out at British TV host, telling him “@piersmorgan ur interviews w/Donald Trump & my ex-wife are pathetic! Think she’d find something new to discuss instead of rehashing old s*** but I guess she has nothing else going on & needs attention.” He then added “Signed, The Abuser (who she texts everyday and asks for me back).” Wow, there’s a whole lot of family drama going down in just the past 72 hours. 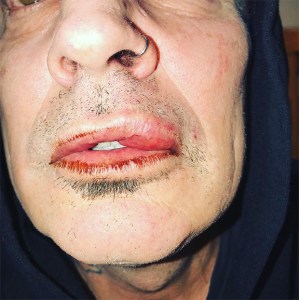