A remake of the iconic film, Overboard, is being released on April 20, 2018, and the first trailer reveals that Anna Faris, 41, was the perfect actress to star in the film. The twist in the 2018 version is that it’s a gender-swap, meaning the man, Eugenio Derbez‘s Leonardo, will fall overboard, get amnesia and be tricked by Anna’s Kate. However, the one thing that totally stole the show in the trailer is how identical Anna’s Kate looks to Goldie Hawn‘s Annie! They are both bright blonde, they both have beautiful blue eyes, and Anna’s shaggy bangs and soft spot for denim really channels the way Goldie’s Annie settled in after she was tricked by Dean (Kurt Russell) in the original film. We’re obsessed!

The synopsis for the film is fairly simple, especially since there’s a 99.9% chance you’ve already read it. “A spoiled, wealthy yacht owner is thrown overboard and becomes the target of revenge from his mistreated employee. A remake of the 1987 comedy,” the synopsis reads on IMDb, leaving out the fact that it’s a gender-swap movie. We are thrilled to watch as Anna Faris takes on Leonardo in the film, and, of course, watching them fall head over heels in love by the end. Limo? Yacht? Nah, who needs ’em! 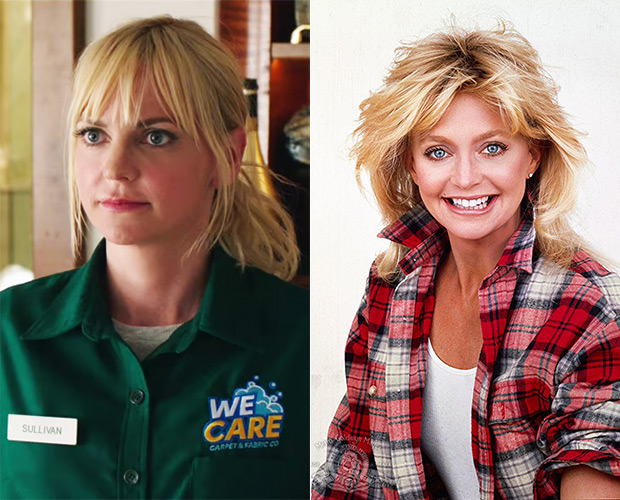 Tell us, HollywoodLifers — Do YOU think that Anna is the spitting image of Goldie? Will YOU be seeing the Overboard remake when it hits theaters? Comment below, let us know!

Related: Goldie Hawn’s Husbands: Everything To know About Her 2 Marriages & Relationship With Kurt Russell