Hottie! Padma Lakshmi is the latest star who isn’t afraid to show off that she’s got stretch marks. But she did it while wearing white undies and completely see-through top so her fans’ attention was elsewhere!

Whoa mama! Top Chef host Padma Lakshmi, 47, as admitted that she gains 15 pounds during every season of the show from having to eat so many delicious and caloric meals, then has to drop the weight when the cycle ends. On Nov. 16 she showed off the toll that the contestants’ dishes have taken on her body by proudly flaunting the stretch marks on the top of her right thigh in an Instagram stories pic. She’s seen laying on a bed with sexy white underwear and a braless sheer white ribbed turtleneck that leaves nothing to the imagination. Padma has such a rockin’ body, but she’s never been one to flash her fans until now. Hey, she’s looking so hot for a woman in her late 40’s, so who can blame her for wanting to celebrate her her fabulous figure with the world!

The Bravo TV host can be seen looking away with a sly smile on her face, and it’s clear she knows she’s looking so fine even without a hint of makeup. Padma is such a natural beauty that she doesn’t need any! She joked “Hey stretch” on the IG stories pic and drew some hearts over her head. She’s got reading glasses on the bed next to her as light is streaming  through the room. Since it’s not a selfie, we’re wondering who the lucky person was to catch her in her undies in such a seductive position. See more pics of celebs showing off their stretch marks, here.

Surely it wasn’t her seven-year-old daughter Krishna Lakshmi-Dell, but it could have been the girl’s father, venture capitalist  Adam Dell, 47. Despite a contentious paternity battle between Padma and Adam during the girl’s early years, they’ve grown close again in 2017. In June, she posted a photo of herself in bed with Krishna and her baby daddy cuddled up while wearing a green face mask. She captioned the pic, “Can I please have some ME time??” and seemed pretty comfortable with Adam as she was braless and wearing a very skimpy white tank top. 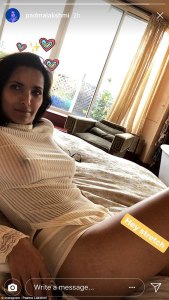 HollywoodLifers, do you think Padma looks hotter than ever?