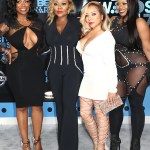 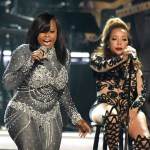 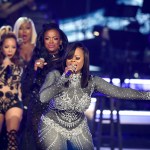 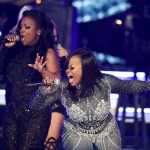 Oh no! The future of Xscape is sadly not looking strong since Kandi has become too busy to dedicate more time to the group, HollywoodLife.com has EXCLUSIVELY learned. Find out details of their anticipated breakup here.

History is repeating itself! Classic girl band Xscape may once again be breaking up after Kandi Burruss, 41, revealed she is too busy to stay in the group after their tour ends. “The girls are always fighting and falling out and then making up again, it’s just the way they are,” a source close to Tameka “Tiny” Harris, 42, EXCLUSIVELY told HollywoodLife.com. “They are four strong, independent women with their own agendas, so it’s hardly surprising they butt heads. Kandi is really outspoken, and if she has an issue with someone or something she comes right out with it, which causes a fair bit of confrontation—but, it’s better out in the open than stewing on it. Kandi has a really successful career outside of Xscape, she has a lot of things going on, so she doesn’t prioritize the band as much as the other girls, and that can definitely cause friction.” Check out some of Xscape’s best photos here!

The band’s reunion after 18 years first made headlines back in June when their reality show was announced and fans everywhere rejoiced. Since then, they’ve put on many impressive performances proving they still have what it takes to make their mark in the music industry. Despite numerous rumors surrounding the talented singers, they made a strong comeback and don’t seem to want to give up too easily whether or not all members can’t be a part of the long term future. “Kandi has made it clear that she won’t be available to work in the studio full time after the tour finishes, but the other girls are still committed to laying down some fresh tracks, so they intend to carry on as Xscape, at least for one more album,” the source continued. “Continuing after that though is fairly unlikely, it takes a lot of time and commitment to be in a band, and the girls aren’t as free and single now as they were back in the day.”

We’re glad to hear these lovely ladies are planning on continuing for at least one more album and we hope by then, they can work something out that will lead them to continue even longer! We just can’t get enough of our Xscape rush!

HollywoodLifers, are you upset that Xscape is breaking up? Tell us your thoughts here!