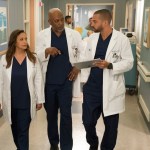 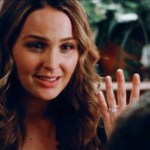 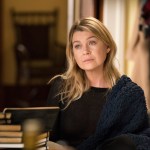 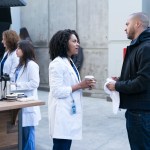 OMG! Our minds nearly exploded during the 300th episode of ‘Grey’s Anatomy’ on Nov. 9, when all of our favorite characters made epic returns to the series. Well, sort of…

First and foremost, we must mention that Meredith finally won a Harper Avery Award during the Nov. 9 (and 300th) episode of Grey’s Anatomy. She, of course, was too busy to accept the award in person, but that was because she and the rest of the doctors at Grey Sloan Memorial Hospital were bombarded by ghosts from their pasts. Specifically, those of Cristina, George and Izzie! We had already known this was going to happen, but we never expected Alex to shed tears over the sight of an Izzie lookalike! More on that later, though.

Meredith had skipped out on catching her flight to the awards ceremony when she saw the George, Cristina and Izzie’s lookalikes show up at the hospital with massive injuries from a rollercoaster crash. And she wasn’t the only one that saw the resemblances. Bailey and Richard couldn’t believe their eyes either. But even so, Bailey was super worked up after finding out Ben has been training for the fire academy, so she barely had time to concentrate on the patients. Instead, she nearly threatened to end her marriage to Ben. Fortunately for him, however, she later softened up to the idea of him leaving his cushy job as a surgeon.

Elsewhere, Alex nearly sobbed over the sight of Izzie’s lookalike, and Jo noticed. But she didn’t seem to be upset about it. Instead, she insisted Alex call Izzie to find out how she’s doing. Yet, he said he didn’t need to because he already knows she’s doing well. At least in his mind, she is. He said he likes to imagine that she’s happy with a husband and three kids, and a house that’s decorated with Christmas lights year round, because obviously, she wouldn’t have it any other way. “When I picture her,” he said, “she’s always smiling.” It was a super sweet moment, but one that made us miss Izzie that much more.

Oh and did we mention Meredith’s mom, Ellis, made an actual return to the series? Meredith noticed her in the gallery above the operating room, looking super proud, as Meredith watched Jackson accept her Harper Avery Award on her behalf. And even though other former cast members didn’t return, there certainly wasn’t a shortage of homages to their characters. Lexie, Mark, Derek, Burke, and Callie were all mentioned throughout the episode. And Cristina called Meredith to congratulate her on her award. If you ask us, it was the perfect way to celebrate the series’ 300th episode!

Side note — Andrew is now hooking up with that intern he ran into last week (Sam), and she’s definitely not a stranger. Apparently, they used to date and had a pretty toxic relationship.

HollywoodLifers, what did YOU think of the 300th episode of Grey’s Anatomy? Tell us below!