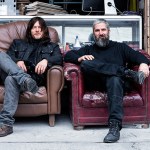 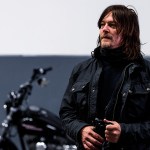 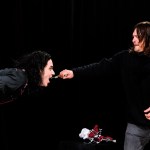 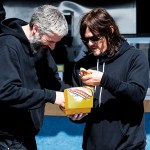 Comedian Dave Chappelle joins Norman Reedus for the ride of a lifetime on the second season of his series, ‘Ride With Norman Reedus’ — and we have an EXCLUSIVE preview of the new episode!

Dave Chappelle, 44, loves to ride motorcycles just like Norman Reedus! In this EXCLUSIVE preview of Ride with Norman Reedus provided to HollywoodLife, Dave credits his “mid-life crisis” for his bike riding obsession. “I started 2007,” Dave told Norman over coffee in the new episode, which airs Monday, November 6 at 9/8c on AMC. “Early mid-life crisis. I quit my show and it was like… I started riding bikes. Once I got on a bike it was over.” Norman repeats, “It was over.” Lets be honest, no one knows the passion of bike riding the way Norman does — he’s been riding his whole life!

Norman also makes a comment about Dave’s physique, because he’s, as Norman puts it, “jacked.” Dave jokingly responds, “I wore this shirt just so I could show off [inaudible]. Look what I’ve done to my body!” In the clip, Dave raises his arm and flexes for the camera as Norman bursts out laughing behind him. Meanwhile a crowd is forming outside of the little coffee shop they’ve been chatting in. “It’s very exciting. Dave Chappelle and Norman Reedus are drinking coffee,” Dave jokes before the two of them take a selfie. Then they head outside to take even more selfies, much to the delight of the waiting crowd. How sweet!

In the episode, Dave and Norman ride their bikes together from Charleston, South Carolina to Savannah, Georgia. It’s in Lowcountry that they stop to “experience” the culture, which will be very exciting to watch. Make sure you tune in for the brand new episode!

Tell us, HollywoodLifers — What do YOU think about Dave joining Norman for a new episode of Ride with Norman Reedus? Comment below, let us know!