This may be the most random celebrity feud to date! The drama originally started last month when Covergirl spokesperson James Charles, 18, tweeted out that he didn’t enjoy the movie IT on Sept. 8. The tweets, which he’s since deleted state, “Ok five minutes in and IT is already awful stay tuned for update”. The beauty guru went on to say, “This movie is so predicable I’ve been texting @(friend) what I think is gonna happen next & I’ve been right every single time so far.” Click here to see photos of the ‘IT’ remake!

That’s when IT and Stranger Things star Finn Wolfhard stepped in and asked what all of us were thinking. “Why are you on your phone in the movie theater?” the young actor asked in a tweet. “I just got dragged by a legendary child actor I’m kind of honored,” James responded. James then started to change his tone when he tweeted, “It was a FANTASTICALLY made movie. I went into it expecting to be more horror & was disappointed when I wasn’t scared. Simple as that.” Perhaps James wanted to change his tone about the movie because on Oct. 8, he uploaded a Halloween makeup tutorial featuring Pennywise the Clown makeup on his youtube channel!

But wait, there’s more! Finn’s co-star, Wyatt Ghouleff then chimed in and TOTALLY called James out. “When you decide to exploit a movie that you hate for money & attention cause why not… it’s not that I’m trying to be mean or roast anyone here, I get it, it’s just business. Not a big deal. Just how the internet works,” he tweeted. James obviously had to retort back and tweeted, “I’m not apologizing for doing a tutorial my followers asked for I promise sister.” Ouch! Thankfully, Wyatt seemed to want to keep things professional and said, “Guys, @(James) is just doing his job. His fans asked for the tutorial so he gave it. We’re human, we make mistakes. Don’t be a jerk.” James then responded by saying, “Thank you sister”. Phew, crisis averted! But, Wyatt did have the last word by correcting James and tweeting, “brother** but ok”. 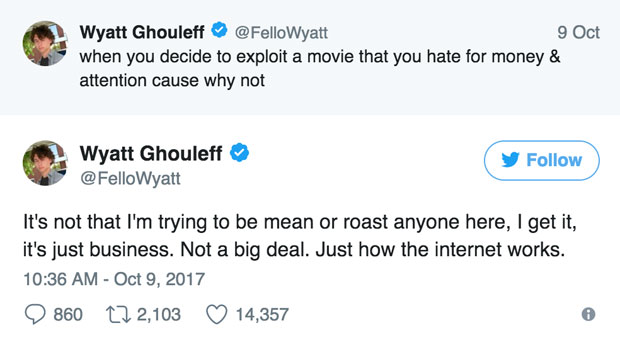 This isn’t the first time James Charles has been under fire. As HollywoodLife previously reported back in February, the Youtube star got some heat for some crazy comments about the terrible Ebola virus.

HollywoodLifers, who do you think is right here, James, or the IT actors? Let us know below!