That took place one of the nights before the reunion taping when the cast was all in New York, Britni explained to HollywoodLife.com. “We weren’t even drunk when that happened. I had a few cocktails, and I’m a natural flirt, I’m an aries,” she told us. “I was joking with him that he wouldn’t make the first move — I was just giving him sh-t! As women, we’ve got to give the men sh-t! Talk about a surprise — he just grabbed my face, and I get the biggest, juiciest kiss of my life. My face in the video is was priceless. I was totally caught off guard.”

Yes, that was their first kiss — in the house, Britni was in a relationship. “Here’s this girl who I lived with for a pretty long time, who I got to know, and she was so respectful toward the relationship between her and her guy. The whole time there, she was such a good girl toward that. For me, I respected that. We just got to know each other,” Derrick said, adding that they also formed a bond after she made a huge move that “rocks the house,” and really helped out his game.

Following the show ending, her relationship did as well… and she and Derrick started talking on Twitter. “I was thrown off a little bit. I’m still new to dating, and the whole girl thing. I feel like I have no game,” he said. “I felt like I needed to break the ice. When I saw her before the reunion, she had this little pink dress and little cute Princess Leia hair and we just were feeling each other. It was clicking! I was tired of flirting, so I went for the kiss and saw a camera.”

Derrick, who admitted he does not like seeing himself looking mushy or vulnerable on camera, compared their situation to Romeo & Juliet. “Okay, that’s a little extreme, but she’s Are You the One? and I’m Road Rules. By nature, I’m supposed to stick to my side,” he said, laughing. He also shared a photo of him with the AYTO group at the premiere event in New York.

Related: Mike Gabler: 5 Things To Know About The ‘Survivor’ Contestant Who Is Struggling In Season 43 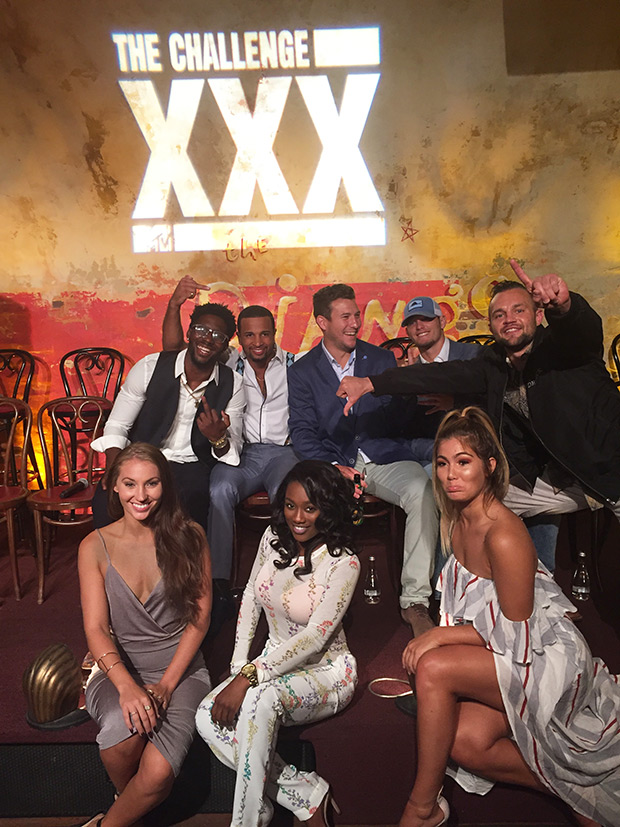 As for where they stand today, they both admitted they’re open to anything, they text almost every day, and they’re seeing where things go. Of course, Derrick has an 8-year-old son, who he will always put first. That is something that Britni really likes.

“Who’s not attracted to a man who actually takes care of his son, and his main concern is how he looks in front of him?” she said, adding she finds his maturity to be “the sexiest thing” ever. “There’s nothing more of a bigger turn on than that right there. That’s Derrick — he’s a man, and they’re so rare these days. When you find a good one, you hold on to them, even if it’s not that form of relationship. You can’t not be friends with Derrick. He’s genuinely such a lover.”

Oh and one more thing? She wanted everyone to know that he’s a very good kisser. Derrick also added, “there is another video…”

HollywoodLifers, do you ship Derrick and Britni?