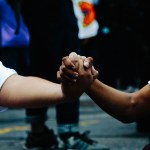 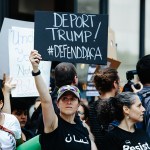 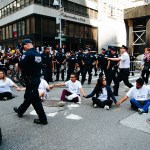 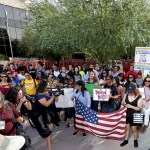 Imagine if you had grown up in this country, went to school, got a job and worked hard, but you just found out this morning that you could be deported, just for existing.

This morning, September 5, 800,000 young people who have only known America as their home, learned that President Donald Trump can’t wait to deport them. That’s because they are ‘Dreamers’ who were brought to this country as babies or small children by their parents, who entered the U.S. illegally. These young people have been living here legally for the past five years, ever since President Obama issued an executive order creating the program called, Deferred Action for Childhood Arrivals. That program allowed “Dreamers” to register with the government to go to college and work legally, for two year periods, provided they broke no laws. Finally, these young people, mostly in their teens and 20s, could come out from the shadows and work to make their dreams happen, just like all American young people -young people like you.

However, this morning, Attorney General Jeff Sessions, acting at Trump’s behest, announced that DACA was ending, despite the success of the program. “The nation must set and enforce a limit on how many immigrants we accept each year and that means all cannot be accepted,” Sessions announced. Just FYI — Dreamers are now in the military, in police forces, are teachers, nurses and work for major corporations like Apple, Facebook, Amazon and AT&T. In fact, over 400 CEOs of top corporations signed and sent a letter to Trump urging that he keep the DACA program. “Dreamers are vital to the future of our companies and our economy. With them, we grow and create jobs,” reads the letter. “They are part of why we will continue to have a global competitive advantage. Many have been their class valedictorians and earned scholarships to go to college.

Deporting them will cost billions of tax payer dollars that we don’t have to waste. Plus, it will cost the U.S. economy $433 billion over the next ten years, according to research by the Center for American Progress. Yes, it cost you and every American taxpayer loads of money to throw people out of the country who were educated here and who are now paying taxes and filling needed jobs. But forget about the economic impact, which makes no sense for a supposedly ‘pro-business’ president. How about just the sheer cruelty of planning to throw 800,000 young people out of the country, who consider themselves American? Just like you, this is the only country they know. Many only speak English. Their families are here. Most have younger siblings born here, who will be allowed to stay. Some already have children, who are American. Some have parents, who are now citizens, but were unable to get that status for them, because they had turned 18. Most know no one and have no connection to Mexico, or any other of birth country. They have no legal status in other countries. Where will they even go?

Imagine if you were walking in their shoes, and just had your entire life destroyed through no fault of their own. Donald Trump wants Congress to find a legislative solution to the DACA program, within 6 months, before it totally expires. However, His spokesperson, Sarah Huckabee Sanders, just announced that he will only sign comprehensive immigration reform, not just a new law to protect the Dreamers.  But, Lord knows whether Congress party can get its’ act together. The Democratic party fully supports finding legislative solutions pronto. And, thankfully, some Republican members of Congress are speaking out in support of the Dreamers, but not all.

“I strongly believe the children who were illegally brought into this country through no fault of their own should not be forced to return to a country they do not know,” Senator John McCain wrote in a statement about Trump’s decision to end DACA while he promised to work in a bipartisan way to pass immigration reform to save the Dreamers.”We as Americans do not hold children legally accountable for the actions of their parents, “GOP Senator Thom Tillis said and apparently, he is also open to passing legislation that can help the Dreamers stay here. But that may well be knocked down by Trump.

Think about this for a minute — the US is a nation built on the backs of generations of hardworking immigrants. Unless you are a Native American, you are descended from immigrants or actually are an immigrant yourself. Immigrants have given this country its incredible energy and innovation. It is against our ideals to have zero compassion for innocent people who have lived here their whole lives. What will it do to the very nature of America to rip 800,000 young people from their families and throw them out of the country? What will America stand for anymore?

If you don’t think DACA should be rescinded, let your Congress people know loudly and clearly. For more information on how to fight this go to: Protect Our Core Coalition or donate to the National Immigration Law Center, which represents immigrants who cannot afford to fight for their own rights.