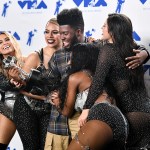 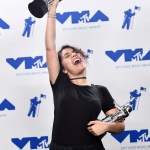 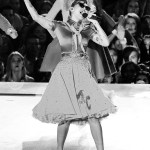 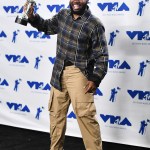 Vanessa Hudgens was a dancing queen at the 2017 VMAs, August 28, and we can’t stop watching her epic moves! The actress pulled a T. Swift in the audience as she sipped her drink and showed off her best moves!

Vanessa Hudgens, 28, is the star to sit next to at every awards show! And, after her 2017 VMAs performance [from the audience], it’s pretty safe to say that celebs may be fighting for a seat next to the actress next year! She was caught dancing like crazy numerous times during the awards show, and we’re officially obsessed with her moves. As she held on to her beverage, V-Hud bopped her head, waved her hands and made the most epic facial expressions to the night’s greatest hits. Needless to say, no one had nearly as much fun as Vanessa at the VMAs! Watch the amazing footage, above!

Since Taylor Swift, 27 — who’s known for her wild awards show dance moves — was absent from last night’s festivities, Vanessa seemed more than happy to take on the job. And, while we all loved her energy, the man sitting to her left seemed hilariously uninterested in joining her. But, Vanessa didn’t let anyone or anything around her ruin bring down the mood. She danced her way through the night, and honestly, she stole the show at times!

The actress sizzled on the VMAs red carpet in a sheer, red mini dress with an exaggerated skirt and tulle. Her red hot number — a Yanina Couture dress — matched her open-toe Sophia Webster stilettos. Vanessa’s entire awards show look was credit to the fabulous Gaelle Paul, who styled her for the night. She kept the red theme for her makeup, by Allan Avendano, who drew the perfect glitter cat eye that matched her rosy cheeks. The red carpet stunner easily made our best dressed list for the night! 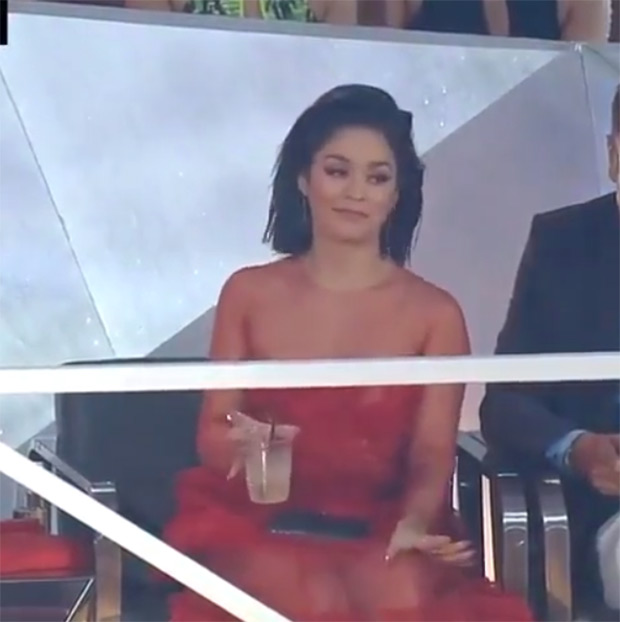 Just two days prior to her VMAs appearance, Vanessa attended the Showtime VIP Pre-Fight Party for Mayweather Vs. McGregor on August 26. Vanessa stunned at the party — held at the T-Mobile arena in Las Vegas — with her longtime boyfriend, actor, Austin Butler, 26. She sported longer, wavy locks in a skin-tight, latex white dress! And, the sexy look may have been her best red carpet ensemble to date! You can decide — Click here for all of the fight night style!

HollywoodLifers, tell us, were you a fan of Vanessa’s VMA moves?