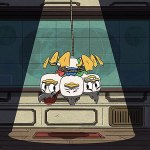 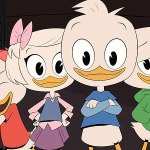 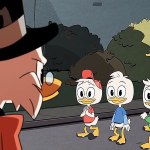 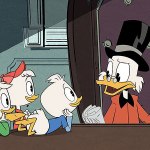 Woo-oo! ‘DuckTales’ is back! HollywoodLife.com talked EXCLUSIVELY with Ben Schwartz and Danny Pudi ahead of the show’s Aug. 12 premiere, and they spilled all sorts of scoop about the revival!

DuckTales, based on the Emmy Award-winning series, will make its triumphant return Aug. 12 on Disney XD. DuckTales chronicles the high-flying adventures of Duckburg’s most famous trillionaire Scrooge McDuck and his mischief-making triplet grandnephews – Huey, Dewey and Louie. Donald Duck will be along for the ride, as well as the trusted McDuck Manor team: Launchpad McQuack, Mrs. Beakley, and Mrs. Beakley’s granddaughter, Webby Vanderquack. DuckTales will premiere in a one-hour television movie to be presented for 24 consecutive hours on Aug. 12 beginning at midnight ET/PT on Disney XD. Then, the series will debut with two new episodes on Sept. 23! Check out our interview with two of the voices behind Ducktales — Ben Schwartz and Danny Pudi!

I have to ask right off the bat, did you watch DuckTales growing up?
Ben Schwartz: We were both huge fans of it. I think there’s a form of nostalgia for people our age that are watching it, and the hope’s that your kids [pointing at Danny], my niece and nephew are going to watch it for the new generation. It meant a lot to me growing up.
Danny Pudi: I think it was one of those shows that we both related to. It hit at that right time, it was after school. It was kind of routine. I’m one of three, so it was a show that my brother, my sister, and I all agreed on. It was really super fun, and now to get to do it now, it does feel like I’m able to appreciate it but also share with kids who grew up with it and now have kids. It’s an excuse for me to watch it, really.

Who was your fave character growing up?
Ben Schwartz: I was a Gizmoduck boy. I loved Gizmoduck and I really liked Launchpad and Darkwing Duck. But Gizmoduck was my thing, because at the time the Huey, Dewey, and Louie were all voiced by the same person. They didn’t really have any distinctive personalities, but this time, they do in a very big way.
Danny Pudi: I was a huge Launchpad fan.
Ben Schwartz: It’s hard not to love Launchpad.
Danny Pudi: Launchpad was just so fun and Gizmoduck, too. I think those two for every boy was just… Gizmoduck was such a hero.

Huey, Dewey, and Louie were all voiced by same guy in the original series, but now the characters are being voiced by three different people. How are the characters going to be different this time around?
Danny Pudi: So they’re triplets. I play Huey, the oldest by 3 seconds.
Ben Schwartz: I play Dewey, who is the middle child, and Bobby Moynihan plays Louie.
Danny Pudi: Each of us sort of has a different point of view. I’ll be the most responsible one, I think. On the outside, I tend to like a plan, I love rules, I love structure, and I love like matching family vacation t-shirts.
Ben Schwartz: The way that Frank [Angones] had meant it is that even though we’re triplets, Huey came out first, so he’s the oldest. I came out second, so I’m the middle child by one second, and Louie’s the young. What Dewey wants to do is just get out and explore. He wants to stand out in a crowd. He wants to be the one everyone looks at. I describe him as Leroy Jenkins. He wants to jump toward adventure, he wants to be the one to show everybody what he’s capable of doing and all those things.

What can you tease about the new adventures in the revival?
Ben Schwartz: There’s so many fun spoiler-y things coming up. But what you’ll see a lot of is… In my head, it’s like, you get the idea of family, the show is about family and that it’s these nephews, Webby, and Scrooge McDuck. So it’s all about the idea of a family, but it’s also this Indiana Jones-type huge adventure every week. It’s like if you went on these adventures with your family.

It’s been 30 years since the original, why is now the perfect time for the revival?
Ben Schwartz: I think the idea of the revival coming now shows that people that are our age that might even have kids can grow up with it… It’s so fantastic. To take the style of animation and make it more comic book driven or a mixture of both of them and present a new version visually of that with the same themes that come from the old show, I think they could play with it more and the storylines are so fun now. For some reason, it just feels like now is the perfect time.
Danny Pudi: It does. I think they did a good job of really reinventing it. I think, for instance, making each of our characters more individual kind of gives them more of a fresh take. It’s a nice blend of the old and new. It’s got a very modern comedic feel to it, which I think will appeal to a lot of people in our generation. But at the same time, it’s still got the spirit of the original comics, which is great for kids and Disney fans.

The theme song has been updated, but it’s still pretty much the same, why do you think it was important that the song stayed the same?
Danny Pudi: It’s so iconic. It’s just an incredible theme song. I think it’s one of those things that’s really special. I would be too scared to mess with it, but I think they did a good job of updating it.
Ben Schwartz: We got to meet the gentleman who made the original theme song, and he is the nicest guy. For me, I love the theme song so much, and it’s almost like the fingerprint of what this show is. Keeping the lyrics the same and giving it an updated feel with the same type of lyrics and rhythm and stuff like that I think is really important. That song floods your senses, and you know exactly what you’re about to see.

Did you feel any pressure about taking on something so iconic?
Ben Schwartz: I think it’s just that we want to do it well. We want it to be good. We want it to be funny. The cast they got is bananas. Us, Bobby, David Tennant, Kate Micucci, Toks Olagundoye, and the guest cast is Lin-Manuel Miranda, Jim Rash, Paul F. Tompkins, Alison Janney, the list is bananas. Oh, Launchpad is Beck Bennett, and he is so funny. The cast becomes such a piece of the show now, and I think it shows the quality of the show that we’re making and there’s other surprises coming up.

HollywoodLifers, are you going to watch the DuckTales revival? Let us know!