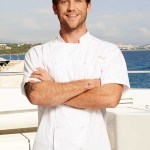 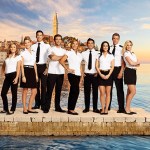 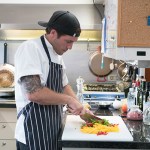 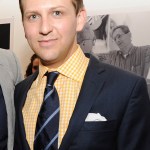 As the 2nd season of ‘BD Mediterranean’ comes to an end, there’s one romance that is still going strong — Malia and Wes! The two stars took us inside their relationship and spilled the tea on what really went down bts!

How are we already at the final charter on Bravo’s Below Deck Mediterranean? The season two finale airs tonight, August 8, at 9 PM; but, you don’t have to wait until then for some epic scoop about the crew! When we left off last week, Hannah and Bugsy were still at odds over their work loads; Bobby was still schmoozing over a charter guest he matched with on Tinder; the entire crew was basically weighing in on Malia‘s love life; and the biggest storyline of the season got even crazier — Malia and Wes heated up! But, not before Adam could come in to ruin the fun.

Adam decided to quit licking his wounds and apologize to Wes for treating him so poorly because of his love for Malia. And, although he decided to make amends with Wes, that didn’t lessen his disdain towards Malia. In fact, when last week’s episode wrapped, Adam showed Wes the texts Malia was sending him while seeing Wes. And, now we’re waiting to see what will happen during the finale!

While we wait for the highly anticipated last charter of the season, HollywoodLife.com EXCLUSIVELY chatted with Malia and Wes, who told us that their relationship is stronger than ever right now. The adorable pair even weighed in on Bugsy and Hannah’s drama, Hannah’s texting scandal with a charter guest and so much more! Oh, and if you labeled Malia’s personal drama as a “love triangle” all season, you may want to listen up. The feisty blonde dished on her side of the story and wants you to know that she doesn’t toy around with the “L” word! Read our full interview below!

What’s really going on between you two?

[Malia]: Once the season came to a wrap and the cameras disappeared, Wes and I were lucky enough to get to know who one another without all the drama and outside influences. He’s an amazing guy and we are having fun seeing where things go!

[Wes]: Once the continual interference from a lot of people disappeared, we were able to get to explore our feelings towards each other in a more natural way. I have been lucky enough to get to know Malia over the past 11 months and found out what an incredibly compassionate, smart and ambitious lady she is. I am extremely lucky to have her by my side.

Everyone has their own thoughts about Malia’s said, “love triangle.” But, was it really a love triangle?

[Malia]: Haha I’ve never been a fan of that term “love triangle”. Love isn’t a word I throw out often; I’m a very guarded person when it comes to real intimacy and relationships. What was forming on the boat was probably a form of lust exacerbated by confined living quarters out at sea! At one point, all three guys were gunning for me; there has to be cabin fever to blame!

[Wes]: Haha I think the term “love” misrepresented what was going on. A few guys on the boat had an interest in Malia and pursued that, knowingly that other guys on the boat were doing the same. It was more a bunch of people fumbling around trying to figure out their emotions. I think Adam tried to play heartbreak as an alibi for his actions throughout the season. I think if he genuinely “loved” Malia like he said, he would have told me from the beginning and the whole season would have had a completely different outcome. Instead he chose the last night of an entire charter season to tell me.

So, now that we know what’s up, Malia, what is your side of the story? Do you think that you played Wes and Adam, like the Max said?

[Malia]: Haha, Max is such a pot-stirrer, he called me a player because I was exploring both options. But, had it been Bobby doing the same thing with two girls, I’m sure he wouldn’t have had a problem with it. With that being said, I should have been more honest with both guys and let them know sooner how I was truly feeling about both of them. No one deserves to get played.

My side of the story: I met Adam first and was crushing, but it became clear to me that Adam is intense in the relationship area and looking for something more serious than I’m ready for at this stage in my life. Meanwhile, spending my time alongside Wes, we just get along so well and are passionate about a lot of the same things. It was hard not to fall for him. When the “love triangle” drama came to a peak both guys showed their true characters in their reactions to one another and myself. It’s safe to say, after that, the decision was easy to make.

Wes, how did you feel/what was your reaction to Adam being a bit aggressive when he found out about you and Malia?

[Wes]: Everyone has their own way with dealing with emotions. I was rather surprised in the manor Adam decided to go about his. He definitely acted out and said some extremely hurtful and inappropriate things, which in my mind would not be OK in any world. I like to think I always take a more responsible and mature approach to an issue, no matter how hurt I am. It’s part of being an adult.

When everyone wants to know who you 'chose' 🙈whether you are team @chefadamglick or team @wesbelowdeck, It was never my intention to play or hurt anyone. Both are great guys for different reasons! ❤️Green yachtie lesson learned!🤙 #teammalia #boys #whatsagirltodo #shipwreck #lessonlearned #notaplayer #staytuned #belowdeck #belowdeckmed @bravotv

Bugsy and Hannah’s drama has been silently building for some time. Do you agree that Hannah’s been a “lousy chief stew” as said by Bugsy?

[Malia]: At times during this season I felt like a deck/stew- Hannah asked me to fill in for Lauren on multiple occasions, and I was always giving Bugsy a hand when there wasn’t another stew in sight. I feel if things were managed better, things wouldn’t have gotten to be such a mess. I don’t have the interior experience to judge Hannah’s Chief Stew abilities, but it sounds like both of her stews wanted a little more out of her this season.

[Wes]: I don’t work on the interior, so I don’t really see what goes on there; I only see what the viewers see. However, I do see where some issues are and could arise from. I think a big one is the issue that Hannah has worked her 7 or 8 years in the industry; However, she no longer works full time on yachts and hasn’t for awhile now. Whereas the rest of the crew are involved and work in the yachting industry on a daily basis. This could lead to some disagreements on how certain things are meant to be done and what is expected out of each crew member.

Lauren and Max told us that Hannah’s texting drama caused quite the divide within the crew. Would you both agree? And, what’s your take on her flirty relationship with the charter guest? [Before answering, both Malia and Wes clarified that personal relations with charter guests are forbidden.]

[Malia]: I tried to stay out of the texting drama. I think it was a situation that got blown out of proportion by all parties involved. I wish Hannah and the crew involved (bugs, bobby & max) would have just hashed it out and moved on! The texting drama definitely caused a divide in the crew. But, then again so did my love life! The vibe got weird in the middle of the season; it seemed like sides were forming over drama that really didn’t need to be such a big deal. There were a lot of strong personalities this season and I think that makes easing tensions a little more difficult. Now, I think there’s a group of us that are still close friends and as for the rest of them…

[Wes]: From the get go, I knew it was going to be drama, and therefore never got involved. I think in some way, every party involved was wrong (including Jason). However, it was not my place to make a decision or my place to say anything. It was entirely up to Captain Sandy, and we had to respect her decision. She is the captain after all. There is definitely a divide in the crew, however this wasn’t just because of Hannah’s drama. There were many ongoing issues through the whole season that exacerbated the divide. I just believe that if you have nothing good to say about one another, don’t say it at all.

As for the finale [tonight], what can you both tease?

[Malia]: Well, I think by the time of our last charter, all of us didn’t care to be civil anymore. It was time to get things off our chest and have our final say! So get ready for tensions to rise and that divide to become clear.

[Wes]: I think the finale definitely shows the friendships that grew through the season and who people chose to align with. Can we trust everyone’s intentions?

HollywoodLifers, incase you guys didn’t know, the Below Deck Mediterranean cast filmed the show’s first-ever reunion special, which will air next Tuesday [August 15] at 11/10c! So, we had to ask Malia and Wes all about it!

[Malia]: Since we’ve wrapped filming, a lot of us have gone our separate ways; So, coming into it, I think we are all ready to just bury the hatchet. Although I am a little nervous to get grilled about my love life. The “love triangle” isn’t something I anticipated and it’s not something I was too fond of having to deal with this season. Sometimes, Adam can be a loose cannon, so I’m hoping we can be civil and take the high road.

[Wes]: I think a lot of the crew has some baggage to unpack and some people have some explaining to do, including myself. Just hope everyone is ready to be honest and tell the truth so we can all be civil rather then petty.

HollywoodLifers, don’t miss the season 3 finale of Below Deck Mediterranean when it airs August 8 at 9 PM ET, only on Bravo!