There’s no doubt about it that Kylie Jenner’s boobs are bigger than ever, so did she go under the knife to achieve her enviable chest? We’ve got EXCLUSIVE details from a top plastic surgeon on whether she got breast implants.

When Kylie Jenner showed off a selfie in a bright yellow bra on July 24, there was no mistaking that the 19-year-old’s breasts were noticeably larger than ever before, and it wasn’t the help of a push-up bra giving her the massive cleavage. Instead, a top Beverly Hills plastic surgeon believes she definitely had her girls bumped up several cup sizes. “I think Kylie has 100% had her breasts enlarged. What you see in the photo is a surgical result. She’s had a good number of CC implants put in. She looked to be a mid B size before, maybe a 32 B something around that size. It looks like now she’s got to be up into the 38 D’s almost. I’d say two cup sizes up and about three breast sizes. She’s gone up quite a bit,” Dr. McCoy Moretz of FACE of Beverly Hills tells HollywoodLife.com EXCLUSIVELY.

In 2015, Kylizzle confessed that she used the Bombshell bra by Victoria’s Secret to make her chest appear fuller and even showed pics proving it, but that isn’t the case today. “Well, what the Victoria Secret Wonder Bra did was it pushed the lower half of the breasts into the upper half of the breasts and gave lots of roundness and fullness to the breasts which increased the cleavage. Here, we don’t see that. It looks very much enhanced by way of implants. Her entire circumference of her breast mound is double-ish what it was in the other photograph. It’s huge,” Dr. McCoy adds.

In Aug. 2016 she responded to boob job rumors by saying that her girls appeared larger because of her period. “Um never,” she tweeted to a fan who asked if she’d had breasts done then added “TMI but it’s that time of the month lol.” She also noted, “They will deflate soon. And it will be a sad sad day.” Well, that never happened.

A month later in Sept. 2016, she responded to plastic surgery rumors again by saying her boobs were bigger because she put on weight. “No, people – I haven’t gotten breast implants!” she wrote on her website. “Everyone is obsessed with that. Truth is, as I’ve gotten older, I’ve gained 15 pounds and my body has changed; I’ve definitely filled out.” While he waistline remained tiny, her chest sure got bigger! So far she has stayed mum on the latest round of breast enhancement rumors. 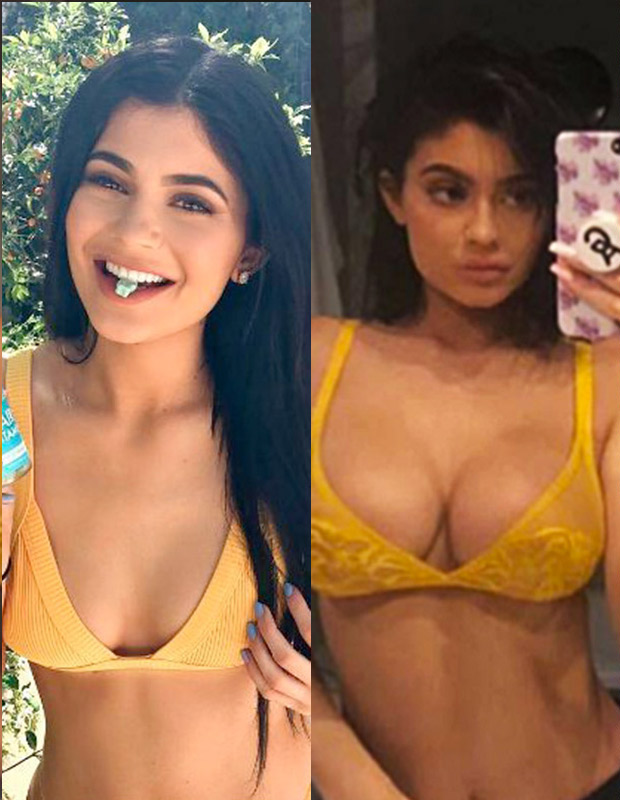 HollywoodLifers, do YOU think Kylie got breast implants?