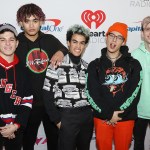 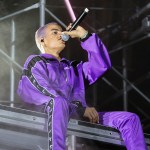 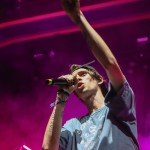 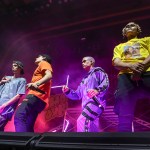 PRETTYMUCH is here to cheer you up during One Direction’s (possibly permanent) hiatus! On the eve of their first single ‘Would You Mind,’ they told us all about their unique musical and dance vibe, collaborating with French Montana and more.

This conversation with Brandon Arreaga, Nick Mara, Zion Kuwonu, Austin Porter and Edwin Honoret of PRETTYMUCH has been edited and condensed for clarity. You can hear their first single “Would You Mind” (July 21) above!

How did the band come together?

Edwin: We’re all on social media, singing and dancing, doing our own thing, and Sony Music and Simon Cowell had a project in mind. They scouted us individually, put us together, and we moved out to L.A. in March 2016. Since then, we’ve just been brothers.

Nick: Simon had this vision and saw a band who can dance and sing, something real that genuinely takes time. So he scouted us, some later than others, and once we came together, they threw us in a house in L.A.!

Brandon: I know how Simon can come off on TV, but in reality, he’s just another human.

Brandon: We like to call him that because he has our best interests in mind and always makes sure we’re having fun. When we see him, it’s awesome, because he’s so happy to see us and he makes sure we have the tools we need to pursue our dream.

Do the One Direction comparisons bother you guys?

Edwin: No! To be placed in a category with people who made it so far is like a blessing. We respect them 100% because we love their music, but we’re also a different vibe.

Austin: They’re the biggest band in the world, but we’re in the beginning of our career, so it’s hard to compare.

How would you describe your dance style?

Brandon: Something that’s unique is that between the five of us, we all have such an individuality with our dance, but we’ve learned to tie it all together and be a unit. Then when you look at each person, it’s like, “Oh, I see ‘Zion sauce,’ I see ‘Edwin sauce.'”

Edwin: Anyway, we try to keep it like that because we’re individually creative, but as a unit, we destroy!

Hold me down @iamhalsey (full dance on our YouTube, link in bio!! 😊)

How about your music?

Brandon: We want people to have as good of a time as we’re having, when we’re performing or just singing it on the record.

Edwin: Get hyped, get up!

You already have a collaboration with French Montana coming, which is so cool. How did that happen?

Austin: With French, they came to our people about it and we all worked together…

Brandon: It got to French’s manager, and when he heard it, he was like, “Wow, I love this, I love these guys, I’m gonna get on this.” Literally that day, he recorded his verse and sent it back to us. We’re like, “This is sick!” It’s exciting.

Nick: We thought that’s just what happens, then they were telling us, this doesn’t just happen!

Brandon: He’s believing in us, so we’re grateful for that.

And you met him, right?

Austin: We were invited to a party for his movie, and we show up and were chilling, then French sees us and points us out, like, “Yo, boys! Come over here!” We were hanging out and he was excited about the music and the song. Having somebody as big as him telling you that puts you in this headspace, like, “Whoa.”

Can you describe the moment when you knew this was for real?

Zion: When I found out I was going to be a part of this group, I was still living in Ottawa at the time. It was so surreal. Every morning I had to check my texts to make sure Edwin was a real person, and Nick, and that everything actually happened, because I thought I was going to have to wake up and go back to school or something!

Do you guys have a group text?

Austin: We have so many, I don’t even know which…

Okay, going back to the question…

Edwin: For me, it still doesn’t feel real, and that’s the mentality I like to keep because it’ll keep me grounded. There’s always room for improving.

Brandon: I knew at an early age I wanted to take this seriously, so I’ve been trying to grind, grind, then this happened and I knew it could be it for me. It feels more real but certain times I’ll sit and stay quiet while everyone’s singing or jumping around, and I’m like, “Whoa.”

Nick: For me, it’s similar to Ed. I don’t think it’s hit me yet. I’m comfortable in what we’re doing even though so many things are happening. You don’t have time to sit and dwell, but when you do get the time for yourself, you don’t take the opportunity for granted.

What’s the concept behind ‘Would You Mind?”

Edwin: It’s a song when you see a girl, and you’re like, “Dang, I wanna pull that girl closer.” You do the gentleman-ly thing and ask, “Would you mind,” like a lowkey pickup line. Getting that girl in the most polite way.

Brandon: It’s high-energy; we want to get people dancing. We want to surprise the world a little bit with those harmonies, throw something at the radio that they haven’t heard.

How about the music video?

Zion: Get ready for lots of excitement.

Edwin: Something you’ve never seen before, that’s a promise.

Austin: It hasn’t been done.

Zion: You’ll watch it and your jaw will be not attached to your body.

Brandon: We’re still figuring it out, but we know the vibe and it’s going to be cool.

Will there be an EP or album?

Zion: We’re not that far yet; the main thing is releasing singles and eventually we’ll have an album, but more next year.

Edwin: We want to start performing as soon as possible.

Right, I saw the Atlantic City show was canceled because of lightning. Have you played a show yet?

Edwin: Our first show will be an AwesomenessTV beach house show, then PANDORA’s SOUNDS LIKE YOU SUMMER concert [on July 29.] To be on the same stage with Big Sean will be crazy.

Anything else in the pipeline we should know about?

Oh, my God. I set myself up for that one. Anything in the musical pipeline?

Austin: I was gonna say, Luigi.

Brandon: We’re just excited and we want to say thank you to the fans for supporting and showing love, because they’re everything to us!