Actor Josh Peck, 30, got married to his long-time girlfriend Paige O’Brien during a ceremony in Malibu this weekend, but one very important person wasn’t at his wedding — his on-screen brother, Drake Bell. So why wasn’t the Drake & Josh actor invited? That’s not clear, but Drake, 30, is super upset about the snub, so he took to social media to share his feelings.

First, Drake posted the following message on Twitter on June 18: “When you’re not invited to the wedding the message is clear…” The message has since been deleted, according to buzz.ie but Drake’s tweet was already seen by millions of followers. He also tweeted and deleted another message that read, “I’ll miss you brotha [sic].”

Later, when Josh posted a photo from his wedding, which was attended by other celebrity guests like John Stamos and more, Drake left a nasty comment on his Instagram post. “When you’re not invited to your brothers wedding….cool I get it bro thanks for the invite.” You can see that comment below.

Josh has yet to address the online feud, but there’s also a chance he never will. We have to admit, however, that it’s surprising these two aren’t getting along. Just a few months ago, Drake told us the cast of Drake & Josh has remained super close. “I mean what I can say is we all have remained very very tight and very very close. The whole Drake & Josh family! And any way that we can get back together we all love it. I will just say use the hashtag #WheresWalter and help Drake and Josh find their pops! And we’ll see, we’ll see!” he told HollywoodLife.com EXCLUSIVELY when we asked about a potential revival of the Nickelodeon series. 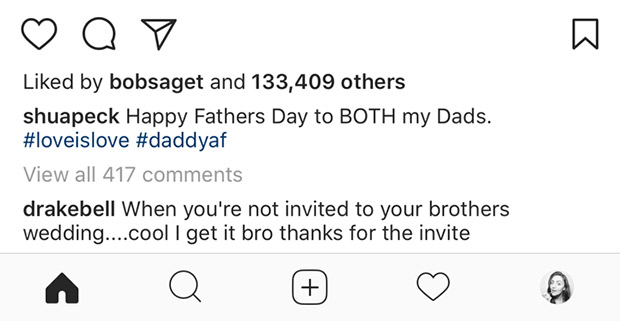 HollywoodLifers, how do YOU feel about Drake Bell throwing shade at Josh Peck? Tell us how you feel below.