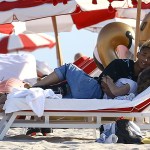 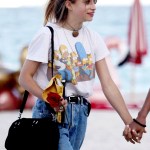 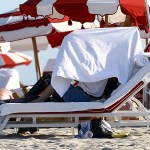 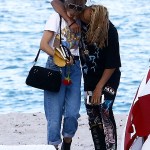 Jaden Smith is so infatuated with his new girlfriend Odessa Adlon that he just can’t seem to let her go for even a second! The new couple were spotted holding hands and doling out some serious PDA at Coachella 2017 in California!

Jaden Smith, 18, is totally enamored by his new lady, Odessa Adlon, 18. The hot young couple were seen at the Coachella music festival on April 16 packing on major PDA and tightly lacing up their fingers while enjoying the festitivites.

Always at the forefront of fashion and style, Jaden showed off his newly shaven head and rocked ultra casual clothes while standing near his lady love. Jaden’s dad Will Smith lopped off his famous dreadlocks on April 11 for their upcoming film Life in a Year. Odessa appeared to be loving the actor’s new look while she herself donned huge overalls and shades. So chill!

While Jaden already seems right at home with Odessa, his split from Sarah Snyder, 21, is still pretty recent. Reports the couple — who had been dating since 2015 — had broken things off arose in March, but it was reported they had actual split two months earlier. Sources said they had been “on the rocks” for a while and had stopped “having shared interests,” according to Us Weekly.

Just like Jaden, Odessa comes from a Hollywood family, as her mother Pamela Adlon was an actress on Californication. She and Jaden already seem to be very happy together and were just seen getting snuggling in Miami a few days ago. We hope to see more and more of this hot young couple soon, as they really are just so adorable together!

HollywoodLifers, do you think that Jaden and Odessa are getting serious? Do they look like they are enjoying themselves at Coachella? Give us all your thoughts below!