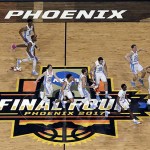 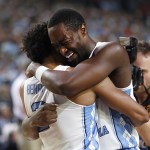 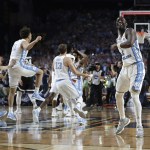 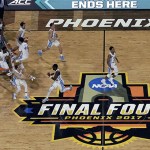 It comes down to this! In a Celebrity March Madness tournament full of shocking upsets, the final match pits Selena Gomez against the ‘Cinderella Story’ of the event, Emma Watson! Only one can be crowned champion so vote for your fave!

It’s Emma Watson, 26, versus Selena Gomez, 24. Beauty & The Beast versus “Hands To Myself.” Hermione Granger versus Alex Russo. One of these powerful women will win the inaugural HollywoodLife.com Celebrity March Madness and walk away the champion. After the fall of such heavyweights as Beyonce, 35, Justin Bieber, 23, Taylor Swift, 27, Kylie Jenner. 19, and more, it’s up to you to vote for the winner.

How did we get here? Well, Selena began her march to the championship round by defeating her fellow Disney channel alumni, Miley Cyrus, 24, in the opening round. Selanators voted in mass against Miley, as Sel got 80% of that first round ‘s vote. In the Sweet Sixteen, she went up against Miley’s 2015 VMA nemesis, Nicki Minaj, 34. Nicki got bounced on her badonkadonk, as Selena walked away with 74% of the vote.

The closest Selena came to losing was against fellow Squad member Gigi Hadid, 21. The sister of Bella Hadid, 20, the ex of Selena’s current bae, The Weeknd, 27, managed to get 35% of the vote, which doesn’t seem a lot but it’s the most that any of Selena’s opponents have been able to score against her. Even when Selena went up against Beyonce in the Final Four, Queen Bey was demolished.

Emma has been a surprise of the whole tournament. Her wins over Remy Ma, 36, and Milo Ventimiglia, 39, in the first and second rounds weren’t too shocking. Yet, the way she put away both Liam Hemsworth, 27, and Taylor Swift to earn a spot in the championship was downright amazing. Considering she was competing in the same conference as Kanye West, 39, and Bieber, the fact that she’s still standing is unbelievable. 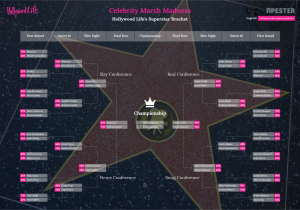 So, it all comes down to this last vote. Will Selena ride the wave and cruise to a major victory? Or will the Beauty & The Beast star’s fairy tale have a happy ending? It’s all up to you, HollywoodLifers, so don’t forget to vote. After all, the only way your favorite star is going to win is if you use your voice.

Who do you think will claim the championship, HollywoodLifers? Which of the major upsets in this tournament shocked you the most?