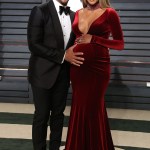 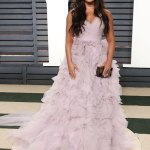 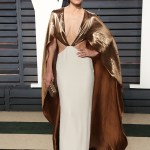 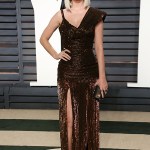 We were having some serious Oscar leg flashbacks after Jennifer Aniston showed a whole lot of thigh at the 2017 Academy Awards…kind of like Angelina Jolie did in another black dress back in 2012. Take a look and see who wore the high slit look better!

Whoa there! Jennifer Aniston, 48, was a special presenter at the 89th annual Academy Awards Feb. 26,  so we never got a good look at her gown since the stunner didn’t walk the red carpet. Thus, the first time we saw the beauty was when she took to the stage to introduce the In Memoriam segment about the stars who died in 2016. She strutted out in a sexy black sequined gown that hugged her amazing curves, and the giant slit up to the top of her left thigh was giving us some serious memories of her nemesis Angelina Jolie, 41.

Angie famously arrived at the event in 2012 alongside her future husband and Jen’s ex Brad Pitt, 53. Her strapless black Versace featured a flowing long skirt, and it had a hidden slit that allowed her to show off her right leg if she posed in just the right way. Boy oh boy did she make the most of it, posing SO HARD, awkwardly jutting out her appendage on the red carpet and while presenting on stage that it quickly launched a zillion memes.

Not only did other Oscar winners who came on after Angie’s presentation mock her by jutting out their right legs in such an uncomfortable way, someone was ingenious enough to give the limb its own Twitter account! Jennifer didn’t make a great big deal out of her enviable appendage, as we only caught a quick glimpse of it as she strode onstage up to her microphone stand. Way to play it cool yet super sexy Jen!