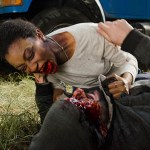 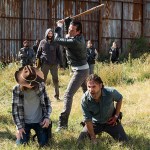 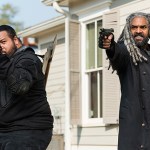 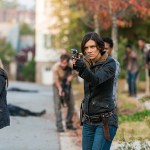 So funny! Unless you’ve been living under a rock, you should be very familiar with ‘The Walking Dead’s infamous Negan scene, where he killed two fan-favorite characters with a baseball bat. Well, on the Nov. 12 episode of ‘SNL.’ Dave Chappelle spoofed the nail-biting moment, and the result is amazing! Watch.

Instead of eliminating Glenn (Steven Yeun) and Abraham (Michael Cudlitz), like Negan (Jeffrey Dean Morgan) did on The Walking Dead‘s Season 7 premiere, Dave Chappelle — who is dressed as “Negan” with a black leather jacket, red scarf and a baseball bat — tortured characters from Comedy Central’s late Chappelle’s Show in the SNL spoof on Nov. 12.

Click here to see photos from ‘The Walking Dead’!

“I just can’t decide which one of you is going to dance with death tonight,” Negan says, as he walks down the line of kneeling victims. “Well, I’ve got an idea. Bubblegum, bubblegum in a dish. How many pieces do you wish?”

“Well, with all due respect Mr. Negan, in my line of work when you’re on your knees, they don’t give you bubblegum,” Biggums says. “They give you penis.”

Watch the full video above to see who gets hit with the bat!

HollywoodLifers, what did YOU think of Dave Chappelle’s Walking Dead spoof? Tell us how you feel below!