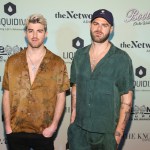 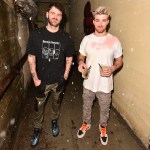 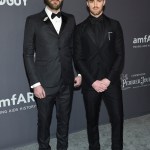 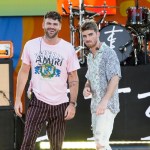 Drew Taggart from The Chainsmokers and singer Halsey may have gotten ‘Closer’ in their MTV VMAs performance, but now he’s farther away from his girlfriend! That’s right, his partner Alex Pall revealed on Sept. 15 that the singer split from his girl after the sexy performance. Here’s the scoop.

Alex Pall of The Chainsmokers stopped by Australian morning show Mike E & Emma on The Edge 96.ONE on Sept. 15, and he spilled the tea all over the place. The radio duo asked the American DJ about he and music partner Drew Taggart’s relationships, since the last time they spoke they both had girlfriends, and it sounds like the personalities got more than they bargained for!

“Actually I still have the same girlfriend but Drew just broke up with his girlfriend like two days ago,” Alex shockingly revealed. We all remember that steamy performance at the VMAs where Drew and sexy singer Halsey nearly kissed, and surprisingly that may have caused the rift.

“You know, I’m sure that factored in,” said Alex of the performance. “I know his girlfriend, I know her really well and I know he really loves her but I think its just a matter of, things are so hectic right now and sometimes you just feel bad about… I think he feels really guilty about the fact that we’re always away and we’re doing crazy things and like there’s certain opportunities and situations that will be coming up that are going to put a strain on is relationship and I think he wanted to free guilt free in the stuff he was doing.”

Guilt aside, it seems like Drew might have his eye on Halsey. “I know that for sure we both have a crush on Halsey there’s no doubt about that,” said Alex. But would Drew be cool with Alex putting him on blast? “Probably not. I’m like, sh*t I’m in trouble. He’s super respectful about it and it was very much not a bad thing, it was like ‘I need to focus on me and do what I’m doing right now’ and hopefully they’ll get back together.” Best of luck, guys!

HollywoodLifers, what do you think of Drew breaking up with his gf after his sexy VMAs performance with Halsey? Share your thoughts with us!