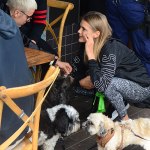 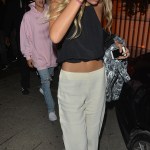 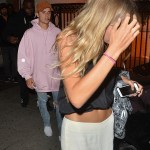 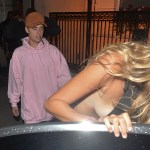 After lavish London nights out at the club, everyone wants to know who Justin Bieber’s new gal pal, Bronte Blampied is! The two have been partying it up together and hopping on private helicopters, and we’re going to tell you EVERYTHING you need to know about the rising model!

Justin, 22, and Bronte, have been parading around London together and the pair have been getting pretty close! She’s the latest Belieber to take a place on Justin’s impressive roster of gorgeous gals and we’ve rounding up five key things to know about the blonde who’s been stealing his focus!

1. This isn’t the first time she’s been spotted with the Biebs…

Bronte accompanied him on his Hawaiian vacation where he was also in the presence of many other beautiful blondes. This was also the vacation where Justin’s naked photos took over the internet, and his rumored romance with Sahara Ray sparked major buzz. Bronte posted this photo below of she, Justin and a bunch of their friends having some fun in the sun.

Bronte’s most recent photo on Instagram is with Sahara and it looks like they’re sitting in a helicopter…hmm. Could this be their boy Justin’s sweet ride? It looks like this group of very tight friends are spending a ton of time together lately.

3. Bronte is a rising model with an impressive following on Instagram.

The blonde beauty posts a ton of bikini photos showing off her rocking body, and this one below has a snake emoji as the caption. With over 10,000 followers on the photo-sharing site, Bronte treats them to her many beach and two-piece shots.

4. She’s quite the traveler too, and she’s not alone!

Bronte has tons of pics on her Instagram in posh hotels and on beautiful beaches. She’s been to Miami, London, Hawaii, Thailand, California, and so many more amazing places! She recently visited Thailand, where it seems like she was joined by her relatives. She tagged Madison Blampied, who looks like she could be her sister, and Chris Blampied, who could be her mother. Madison is also a model, with an Insta following of over 25k, and ironically enough, she joined Bieber and Bronte on their Hawaiian vacay and posted a photo from the wild getaway.

5. Bronte loves the beach and she’s really into posting colorful food pics too! (And aren’t we all?)

Most of her pics are beach photos with a variety of awesome bikinis, and maybe she gets a few from her friend Sahara since she’s a creative director for a swim line. The other majority of her impressive photos are of delicious-looking food, that’s mainly vibrant fruit and other tasty tropical treats!

HollywoodLifers, what do you think of Justin and Bronte spending all of this time together? What about Sofia? Tell us in the comments below!