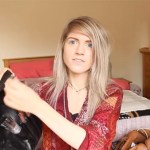 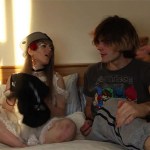 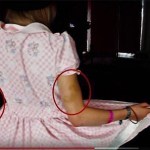 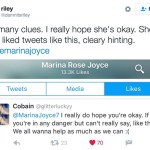 Marina Joyce is finally giving fans an explanation as to why she had bruises on her arm in one of her latest videos. Marina explains what really happened in an all-new YouTube video. Click to WATCH!

“I went to the forest once and then I smacked into something and I got really badly bruised and I bruise quite easily,” she says. “But I had quite a fall and it wasn’t very good. But because I like to go adventure in the park and do stuff like that I ended up falling over and that happened and it gave me a load of bruises. I ended up having all these bruises. And that’s the reason why everyone said #SaveMarinaJoyce and that’s why this happened, really.”

Fans became extremely concerned about Marina’s well-being after she posted a video titled “Date Outfit Ideas” on July 22. Fans noticed she seemed vacant and had bruises on her arms. The hashtag “#SaveMarinaJoyce” began trending worldwide, and police even performed a “welfare check” on Marina to see if she was OK.

Marina has told her fans repeatedly that she’s doing fine, but she never revealed how she got the bruises. We’re glad she’s explaining what happened because her fans were really concerned.

In the new video, Marina also says she doesn’t understand why people thought she seemed out of it. “It’s just me making a video and just trying my hardest to make a video,” she says. “I don’t see what you mean, basically.”

Before she explained everything, Vine star Daz Black revealed on July 26 that he had spoken to Marina. He told fans to “not worry” because she’s “not in an any danger.”

HollywoodLifers, have you been worried about Marina? Do you think she’s really OK? Let us know!