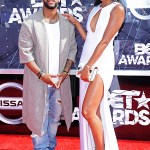 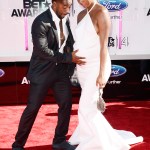 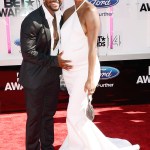 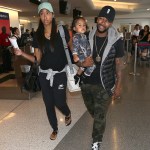 It seems there’s no more ‘Love & Hip Hop’ for Omarion and Apryl Jones. The two broke up on July 10, mere months after she gave birth to their second child. While O claims the split was ‘mutual,’ a report claims he found her cheating with another man!

Another R&B romance has bitten the dust. Omarion, 31, the former B2K singer, and his long-time girlfriend (and Love & Hip Hop: Hollywood co-star) Apryl Jones, 30, have called it quits! What makes this breakup even sadder is that they just had another child together!

“The beautiful and talented mother of my children, for whom I hold the highest regard and respect, Apryl Jones, and I have mutually decided to end our relationship,” Omarion, who performed at LIGHT Nightclub on July 9, wrote in a statement posted to his Instagram account on July 10. How sad! If there’s any silver lining to this, it seems there’s no bad blood between them. “We continue to love and support one another and still share a common goal to remain friends while being great parents to our children.”

Whoa. While any split is sad, O and Apryl just welcomed their second child, A’Mei Kazuko Grandberry, in March 2016, per UPI. And now they’re no longer together! If fans are expecting an explanation as to what exactly caused this split, they’re not going to get it from O. “This is the only public statement I will make about a private matter,” he said. “After this, I will not speak on or respond to any questions or comments on the matter. I thank everyone in advance for respecting my wishes to keep my family life private.

Apryl didn’t really offer any other details, either. After O posted the breakup announcement, the now-ex girlfriend of the “Post to Be” singer confirmed the split. “Single…the end…,” she tweeted. What’s with the silent treatment? Well, Omarion believes that Apryl was cheating on him, an insider tells MediaTakeOut. The singer reportedly “broke into her phone” and found some “suspicious text messages” with another man, causing him to break-up with her on the spot!

How sad! These two started dating in 2012. They had their first child, Megaa Omari Grandberry, in 2014. O and Apryl looked so in love before Megaa was born, as the former B2K singer kissed her baby bump on the red carpet of the 2014 BET Awards. While O says “I Ain’t Even Done” on his new single, it sadly seems that his relationship with Apryl is over.

Are you sad that Apryl and Omarion broke up, HollywoodLifers? It seems they’re going to still raise their kids together. What do you think about his breakup announcement?