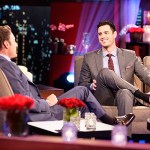 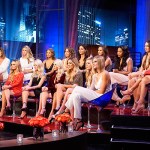 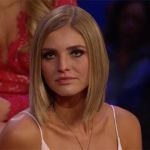 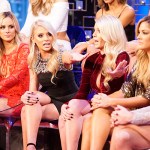 What happens in Vegas, definitely does not stay in Vegas . . . unless you’re one of the twins on ‘The Bachelor.’ This week, he met Emily and Haley’s mom in their hometown — but one didn’t come back to the mansion.

Another week, another bucket of tears. There are a lot these days on The Bachelor. It started with Olivia breaking down during the group date, and just went down hill from there. Well, except for the two ladies who got seriously romantic one-on-ones!

The first 1-1 went to JoJo, but while the girls watched them getting into a helicopter, the wind was a little too intense — and it led a make out session between them. And yup, all the girls saw it go down. During their date, she finally opened up about her fears and they got all romantic. Overall, it was a little snoozy.

The group date was a hot mess to say the least — a talent contest in front of 1200 people. However, it was Olivia who earned the most awkward award, jumping out of a cake ad awkwardly high kicking. She knew how bad it was, having a serious breakdown afterward. Guys, this was her husband. Anyway, after the date, she pissed off everyone again by asking for time with him twice, but it was Lauren B who got the group date rose. Side note: he also called Caila a “sex panther.”

The other one-on-one went to Becca and in true Vegas form, it started with a wedding dress delivery. They then went to a chapel and Ben got down on one knee and asked her if she’d “marry other people” with him. Apparently he’s ordained, so they officiated. Then they had a really good talk and he actually asked about her being a virgin. She admitted it’s tough when you’re physically attracted to not — “jump their bones,” as Ben put it. Basically, they’re adorable.

A surprise twist came toward the end of the episode when he took the twins, Haley and Emily, out on a 2-on-1 date, since they were born and raised in Vegas. He brought them to their mother’s house! Haley’s room had pics of her boyfriend in it which was kind of weird, and ultimately the connection was there more with Emily, so he kept her, and left Haley home with her mom.

During the cocktail party, Olivia showed off her real talent was “eating cake,” not jumping out of it. yes really. After they talked, she told JoJo she told Ben she was falling in love with him — and if she did, we didn’t see it. She also told JoJo that “it was reciprocated.” We must have really missed all of that! Well, she lasted another week: she was called last (“best for last” in her mind) — Amber and Rachel were eliminated.

My favorite part of the night still goes to this: