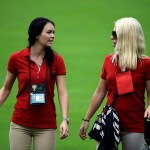 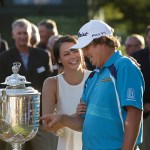 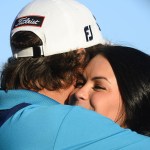 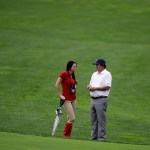 Well, it looks like Tiger Woods, 39, has another scandal on his hands. The pro golfer is being accused of cheating on Lindsey Vonn, 30, with Amanda Dufner, the ex-wife of fellow golfer Jason Dufner, 38, according to a report. Tiger and Amanda were allegedly in the midst of an affair while Amanda was still married to Jason. Here’s what we know.

“Even though Tiger dated Lindsey for years, he had a ‘thing’ for Amanda,” a source tells The National Enquirer. “At first, it was just innocent flirting, but earlier this year it became serious.” In early 2015, Tiger was still in his relationship with Lindsey, and Amanda was still married.

Tiger and Amanda have allegedly been having an affair for months. An insider claims that Amanda is known as a “big flirt” on the golf course. “Amanda is gorgeous, and she’s known as a big flirt with the other players on the PGA tour,” the insider says. “I guess her flirty ways and good looks caught Tiger’s eye.”

Apparently, when Jason found out about Tiger and Amanda, he was “devastated.” Jason and Amanda married in May 2012 and became a well-known couple after he won the PGA Championship in 2013. They divorced in May 2015. Tiger and Lindsey broke up in May 2015 after three years of dating. After their split, it was reported that Tiger allegedly had a one-night stand while he was in a relationship with Lindsey. HollywoodLife.com learned EXCLUSIVELY that there were other reasons behind their breakup.

The source also adds: “Right now, the only sure thing about Amanda and Tiger’s relationship is that it will end with Tiger cheating on her!” Tiger’s first and only marriage to Elin Nordegren, 35, ended in 2010 after a shocking sex scandal. Tiger was accused of cheating on Elin with over a dozen women.

HollywoodLifers, do you think this report is true? Do you think Tiger cheated on Lindsey with Amanda? Let us know.