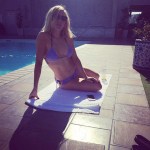 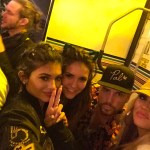 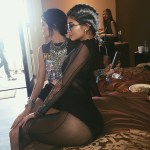 Justin’s list of ladies he flirted with at Coachella keeps growing exponentially! In addition to flirting with Victoria’s Secret model Irina Shayk, the singer was also spotted getting touchy with another VS model, Shanina Shaik, at the festival. Um, we wonder what Shanina’s boyfriend Tyson Beckford would have to say about that!

Justin Bieber, 21, is so confident, he thinks Coachella is his playing field! The “Baby” singer was spotted with his hands around gorgeous Australian Victoria’s Secret model Shanina Shaik, 24, at Coachella Music Festival, which is just another lady to add to his festival flirting list. He totally did not seem to mind — or care — that Shanina is dating actor Tyson Beckford, 44!

Justin Bieber’s PDA With Shanina Shaik: Did He Get Too Handsy?

Justin turned things up a notch with Shanina when intimately grabbing her waist as he made his way through a busy Coachella crowd with her. Of course, we understand the festival was crowded and there were a ton of people there, but he’s literally grabbing onto her waist. We’re not sure how Tyson would feel about that, but clearly, Justin has no problem flirting with taken ladies!

This isn’t the first time Justin and Shanina have hung out. The singer posted a flirty photo of them together in August, right when his ex Selena Gomez, 22, had had enough of him!

Justin seems to be making his way through his group of lady friends at Coachella. Shanina is a good friend of Gigi Hadid, 19, who is dating Justin’s pal Cody Simpson, 18. Not only was Justin trying to pull out the moves on Shanina, but he also flirted the night away at a party with Victoria’s secret model Irina Shayk, 29, and his longtime friend, Yovanna Ventura, 19! Justin was also closely partying and snuggling with with his main gal pals Kendall Jenner, 19, and Hailey Baldwin, 18!

Kendall Jenner, Justin Bieber Fight After His Flirting At Coachella

If it’s any consultation, Justin’s friend with benefits, Kendall, is NOT happy about Justin’s constant flirting. In fact, Kendall reportedly  thinks Justin is a “douche bag” for his flirtatious behavior. He was reportedly “grinding” all over model Josie Canseco at the NYLON Midnight Garden Party on April 10, InTouch reports, which made Kendall upset.

The next day, “She left crying, saying, ‘Justin’s a douche bag,” an insider tells the outlet. “She was flirting with Justin all night.”

Wow. We get that Justin’s having a ton of fun, but he shouldn’t forget people’s feelings are at stake too.

What do YOU think, HollywoodLifers? Does Justin need to tone down his flirting? Let us know!