Things are about to go down on ‘The Bachelor!’ In this preview for the two-night event beginning Feb. 15, Jade heads to Chris’ hometown in Iowa and finally tells him her secret. His response? Well, just watch!

Did Jade Roper, 28, really think she could go through the entire Bachelor season without telling Chris Soules that if he Googles her name, he would find a ton of nude pics and a naked video? Apparently not. In the second to last episode, she finally breaks the news!

“A couple years ago, I did some nude modeling for Playboy,” Jade told Carly in the new trailer for The Bachelor, that aired on Feb. 9 after the episode.

We see that this will be during night two of the special two-night week (Sunday and Monday night), when Jade is taken home to Chris’ family. That’s quite a moment to drop such a huge bomb!

This was Carly’s reaction before she blurted out, “REALLY?” We hear ya, girl. 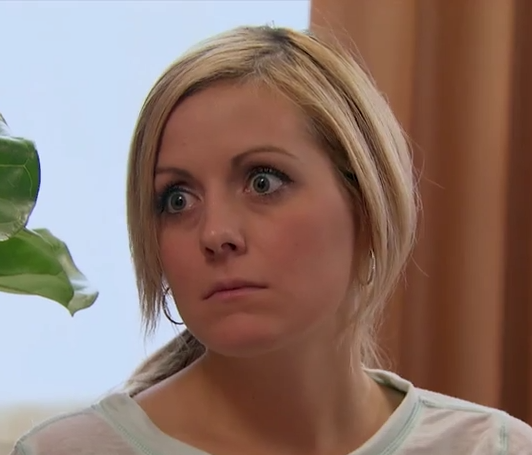 The promo then cuts to Chris nodding his head like he understands, but then says, “I was not expecting this.”

They also show him getting really choked up and actually wiping the tears from his eyes. He totally had a connection with Jade and she came off extremely shy, so we’re not surprised that it totally shocked Chris. She barely could sing in front of people, let alone completely strip down!

Jade also gets teary-eyed, when she says, “This could ultimately end my relationship with him.”

Well, I think it’s a good thing she told him before the fantasy suites or before the end. If she had waited, he could easily have looked her up and see the pics — and yes, there is a video where she’s pretty much rubbing a sheet all over her naked body.

So, do you think he’ll send her home for the secret? Let us know!