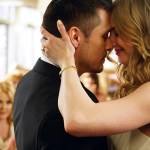 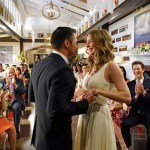 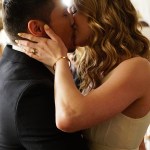 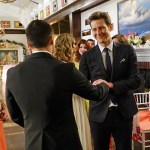 After years of believing that her father was framed and killed, Emily Thorne finally sees David Clarke on the Oct. 19, episode of ‘Revenge.’

The wait is finally over! Emily Thorne (Emily VanCamp) found out on the Oct. 19 episode of Revenge that her father, David Clarke (James Tupper)  — who she has believed to be dead for the last twenty years — is alive after she is asked to identify the man who broke into her house and tried to kill her!

While Emily doesn’t seem to be to scared that someone was in her room trying to kill her, Nolan (Gabriel Mann) certainly has her back and reminds her that she is vulnerable now that several people are after her.

Victoria (Madeleine Stowe) returns to her hideaway after getting money from Margaux (Karine Vanasse) and David returns from trying to kill Emily with a slight limp. Victoria is not very happy when she realizes that Charlotte (Christa B. Allen) is missing — after all, the only job she gave David was to watch her!

Finally David tells the truth that he had gone to Grayson manner where he came close to killing Emily, but was unable to. The two then embrace and Victoria whispers, “All I want is the life you promised my years ago.”

I know Victoria always has a plan, but I really hope that her feelings for David are real since we don’t know what he has been doing for the last few decades!

In a risky move that once again proved just how great of a friend Nolan is, he called the cops and reported the break-in. Of course, Jack (Nick Wechsler) showed up with his super handsome partner, Ben who definitely has a crush on Emily — and we have to admit, they would make a really cute couple!

Back at the hideaway David is alone and proves that he is definitely not the same man that we have been seeing in flashbacks for the last few years. He takes a chain from the bridle of a horse and begins to inflict pain on himself by giving himself lashes on the back that cause him to have deep gashes with plenty of blood.

He then heads out to a drug store where he shoplifts right in front of two cops — this was definitely planned and seemed like David wanted to get caught.

At the police station David is brought in and is noticeable limping. Ben notices the limp and starts to put the pieces together that this might be the man who jumped off of Emily’s balcony he then calls her into the station.

In the lineup, Jack immediately recognized Emily’s father and whispers, “David.” Because Jack had prepped the lineup, he was unable to warn Emily that she was about to go in and see her father. With tears in her eyes she calls forward her father as she realizes that after so many years of uncertainty, he is alive. Of course she was not going to say that it was her father who attacked her so she told Ben, “I don’t recognize anyone.”

She then runs right out of the station where luckily Nolan is just arriving. She tells him, “My father, he’s alive. I just saw him in the lineup. I swear to God Nolan it was him.”

While Victoria and Emily have their hands full with David, Louise has her eyes set on Daniel (Joshua Bowman). She clearly wants info on Victoria and continues to ask questions about it — luckily for her, it appears that Daniel believes that she is just into him.

When the feds come in to questions David, Victoria storms in with her own lawyer for him, but David says that he wants to tell the truth because it’s, “all he has left.” He then tells the entire story about Conrad Grayson (Henry Czerny) and how he framed him and took him away from Emily where he was tortured. However that is where his story suddenly switches back into a lie. He claims that he just now escaped and shows the fresh wounds on his back as proof that he had been tortured.

That is when the federal agent tells Daniel that Conrad was killed six months ago and that his name has been cleared. Poor Emily was sent home and is revealed to be stuck in front of the TV crying and looking to see if anyone is reporting on David telling Nolan, “I can’t wrap my head around any of this.”

She then runs down to the station where David is giving a statement. He says, “I’ve prayed for this moment and today my prayers were answered. I never imagined seeing this kind of support from the public that had condemned me and a family that I thought had forgotten about me.” Victoria and Charlotte (Christa B. Allen) then join him at the podium.

Poor Emily! We hope that she gets to speak with her father soon.

What do YOU think, HollywoodLifers? Is this the best season of Revenge? Let us know your thoughts below!