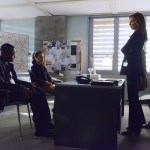 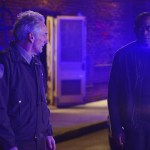 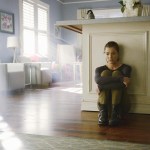 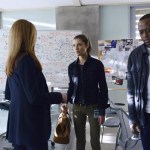 Agent Marty Bellamy is back with a troubling new mission — to monitor the returned and report back to the cold and calculated government officials who have already taken many of the resurrected townspeople. Will Marty be able to save himself and protect the rest of the returned in Arcadia?

The episode begins with Rachael (Kathleen Munroe) telling Pastor Tom (Mark Hildreth) that she wants to move out on her own because she doesn’t feel comfortable being surrounded by his wife Janine’s things. But he insists that she stays, arguing that Janine (Lori Beth Sikes) has made it clear that she doesn’t want anything to do with him. Oh, Tom, how clueless can you be?

Meanwhile, at the police station, Sheriff Fred (Matt Craven) asks Marty a blunt question: “How does it feel to be a snitch for the government?” Better me than someone who doesn’t even know or care about Arcadia, Marty shoots back. Oh, snap!

Sheriff Fred brushes this off and reveals that someone has been living in a hunting shack in the woods — could Caleb (Sam Hazeldine) have returned to his hideout and be plotting another murder? they wonder. This cannot bode well for the town.

Sheriff Fred and Marty go to investigate the shack and on the car ride over, Fred warns Marty not to even think about his daughter, Maggie (Devin Kelley). Marty smiles faintly and says, “Sorry. I just thought about her.”

Over at the Langstons’, Henry (Kurtwood Smith) wants his returned mother, Margaret, to go see a doctor, but not just any doctor — her granddaughter Maggie, whom Margaret hasn’t even met yet.

Pastor Tom’s wife, Janine, seems to be lurking around every corner of this episode so it’s no surprise when she shows up to see Tom at the church. Tom reveals that he resigned this morning because he’s lost his faith, and she suggests that he start his own small church. He loves the idea — do we sense a reconciliation coming?

Marty goes to see his young friend Jacob (Landon Gimenez), and Margaret answers the door. She says she feels like she’s met him before. “But that would be impossible, wouldn’t it?” “‘Fraid so,” Marty responds.  Alone with Jacob, Marty asks if he’s sensed Caleb come back but Jacob says no. Marty also asks the question that seems to be on everyone’s mind during this episode: Is it possible to come back twice? That answer is still unknown, Resurrection fans.

The mystery that is Margaret deepens when she takes Henry to her husband’s now dilapidated factory and freaks out at him for abandoning the family business. Chill, Margaret.

Janine pops up again, this time to pick up her things from Tom’s place, as promised. She sneaks into Rachael’s room and sees her sonogram and starts to cry. You can almost see the I’m-going-to-get-my-man-back plan forming in her mind. Later, Janine goes to see a friend who tells her that she’s being selfish — but that she should keep trying to save her marriage.

Sheriff Fred goes to see Elaine (Samaire Armstrong) and tells her that her father, Caleb, might be back. But she shoots him down, saying she has a gut feeling that it’s not Caleb, and that he’s not coming back — now or ever.

Jacob meanwhile, seems to be preoccupied with death, which I suppose is not uncommon for an eight-year-old boy who has come back from the dead. He goes into the woods and opens a box which contains what appears to be a dead crow — creepy. His mother, Lucille (Frances Fisher), calls him back home and he asks why his grandmother was cremated, while he was buried. Poor Lucille.

After an eerie flashback to his death, Marty finds someone in the shack in the woods, but it’s not Caleb. It’s a man we’ve never seen before, who croaks, “I’m sick. Please, help me,” before collapsing into a heap on the ground.

At Dr. Maggie’s office, she and Margaret come face-to-face for the first time in an emotional moment. Maggie runs some tests and tells Margaret that her cancer is gone. Maragret seems proud of Maggie but she tells her accomplishments mean nothing without a family to call her own. How rude. Just then, Marty rushes in with the man he found in the woods and calls for help from Maggie.

Rachael has a nightmare and Tom runs in and tells her that she’s safe.  He takes her in his arms and she begins to nuzzle his neck, telling him, “You smell like home.” He pulls away after a moment and says he should go. Later that night, Janine  sneaks into Tom’s room and tells him she misses him. Then they sleep together! Crafty, Janine. Rachael is stunned to see Tom’s estranged wife in her bathrobe the next morning, but Janine cheerfully and bizarrely acts like everything is totally normal. Talk about awkward!

‘Resurrection’ Recap: Who Is Arthur Holmes?

Marty visits his mysterious woodsman at Dr. Maggie’s office, and it turns out he’s a new returned, Arthur Holmes (Scott Michael Campbell). Arthur says he died in a fire in 1935 but he doesn’t remember anything about coming back. The bizarre thing about his resurrection is that, unlike all of the other returned, he didn’t come back healed. Arthur is in serious need of medical attention but Marty tells Maggie that Arthur can’t go to a hospital because then Marty will be forced to turn him in to the treacherous government goons.

Margaret goes to visit Arthur and reveals to Maggie that he used to work at the family factory. A little while later, Marty comes in to see Arthur — but he’s disappeared! Marty thinks the government has taken him but an official tells him that it wasn’t them — and that Marty had better find Arthur and bring him in as soon as possible. The samples from Arthur’s blood are gone, Maggie later discovers — which is exactly what happened to Caleb’s blood samples.

Meanwhile, at the Langstons’, Lucille finds Jacob with a box full of dead birds and demands to know whether he killed them. She later tells Henry she feels sorry for yelling at Jacob, but she’s terrified that he’ll be taken from them if people find out that “something’s wrong with him.” Marty visits Jacob again and tells him that he’s returned but asks him to keep it a secret. “We really are different, aren’t we?” Jacob asks for the second time this episode.

The final scene is a doozy. Margaret revisits the factory — this time by herself at night — and is shown desperately digging. Finally, she uncovers something — several skulls! Who do they belong to? Were the owners murdered? Could these be the remains of the first returned? These questions and more are posed in the teaser for next week’s episode, so hopefully we’ll have some answers then because our heads — or should we say skulls? — are spinning right now!

So HollywoodLifers, what did YOU think of tonight’s episode of Resurrection? Are you suspicious of Margaret? Share your thoughts in the comments section below!