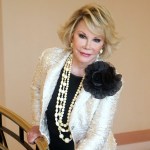 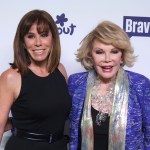 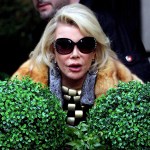 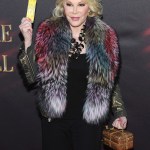 The world is mourning the loss of legendary comic Joan Rivers, who passed away at 81 on Sept. 4. But a source close to Joan tells HollywoodLife.com exclusively that she is in a better place now — with her late husband, Edgar Rosenberg, who committed suicide in 1987.

The great love of Joan Rivers‘ life was undeniably her second husband, German film and television producer Edgar Rosenberg. Joan was devastated when her husband of 22 years took his own life on Aug. 14, 1987, but a source close to her knows that she is “happy” to finally be reunited with him after her own sad passing.

Joan was married to Edgar from 1965 until his untimely death in 1987, and they had one child together, Melissa Rivers, 46. He served as her manager for the majority of their marriage and also co-produced her late-night Fox talk show, The Late Show Starring Joan Rivers. Edgar committed suicide by overdosing on Valium in his Philadelphia hotel room in 1987, just a few months after Fox fired both him and Joan. (Another a sad but touching story — network execs initially wanted to ax only Edgar and when Joan fought back, they fired the husband and wife duo.)

After nearly 30 years, Joan had never really came to terms with her husband’s suicide, a source close to the late comic tells HollywoodLife.com EXCLUSIVELY, adding: “Joan’s a happy woman now. I know she is. Because now she’s reunited with the love of her life, her precious Edgar.”

So touching. No doubt, Edgar would have been so proud of the groundbreaking career Joan went on to forge. Just two years after his death, she found enormous success on another daytime talk show, The Joan Rivers Show, which ran for five years and earned her a Daytime Emmy award for Outstanding Talk Show Host in 1990.

Joan thanked her late husband in her tearjerker of an acceptance speech:

Two years ago I couldn’t get a job in this business. I could not get a job. My income dropped to one-sixteenth of what it was before I was fired. And people said I wouldn’t work again. And my husband had a breakdown, and it’s so sad that he’s not here, because it was my husband Edgar Rosenberg who always said, ‘You can turn things around.’ And except for one terrible moment in a hotel room in Philadelphia when he forgot that. This is really for him. Because he was with me from the beginning. And I’m so sorry he’s not here today.

Joan passed away on Sept. 4, just one week after she went into cardiac arrest during a vocal cord operation. Her daughter, Melissa, released the following statement later that day:

It is with great sadness that I announce the death of my mother, Joan Rivers. She passed peacefully at 1:17pm surrounded by family and close friends. My son and I would like to thank the doctors, nurses, and staff of Mount Sinai Hospital for the amazing care they provided for my mother. Cooper and I have found ourselves humbled by the outpouring of love, support, and prayers we have received from around the world. They have been heard and appreciated. My mother’s greatest joy in life was to make people laugh. Although that is difficult to do right now, I know her final wish would be that we return to laughing soon.

Joan’s family has planned a funeral for her at Temple Emanu-El in her hometown of New York City on Sunday, Sept. 7.

Our thoughts and prayers continue to go out to Joan’s loved ones during this difficult time.