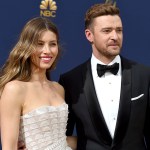 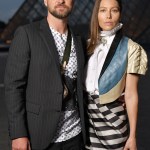 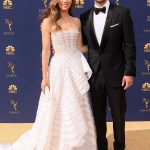 Justin has been on the road with his 20/20 tour for almost nine months without his wife, Jessica Biel! Now shocking new photos show Justin, dancing and canoodling with Zenya Bashford, his backup singer, at a nightclub in Paris. HollywoodLifers, do you think Jessica should be worried?

Justin Timberlake has some explaining to do. A new report claims claims Justin got a bit too close with his backup dancer, Zenya Bashford, while partying at the VIP Room, Aug. 21, in Paris. The pictures show Justin dancing with Zenya and we’re sure his wife, Jessica Biel, won’t be too thrilled, especially since he was partying at 1am halfway across the world.

Justin Timberlake Caught Getting Cozy With His Backup Dancer

In one photo Justin has his hand on Zenya’s neck, then her lower back, then she has her arms wrapped around his neck.

Although Justin’s rep tells Star that there is nothing going on between him and Zenya, the photos could potentially be a cause for concern.

“It was definitely more than friendly,” an eyewitness alleges. “They were dancing in a way that no married man should ever dance with someone who is not his wife.”

The insider goes on to claim that Jessica would “hit the roof” if she saw the photos that were published in both the National Enquirer and Star.

“Jessica is no fool,” the insider adds. “She knows she has to keep an eye on Justin. She’s noticed that he’s friendly with a lot of his backup crew but she’s been especially suspicious of Zenya.”

To top it all off, Justin and Jessica have been having some major issues trying to start a family, according to Ok! magazine.

“They’ve been trying to conceive for a couple of months now, and she told Justin she’s going to see a fertility expert,” a source says. “She has no problem using technology, if that’s what it will take to have a baby and stick this marriage out.”

We hope these pics were taken out of context and that all is well in their world!

HollywoodLifers, do you think Justin would ever cheat on Jessica?