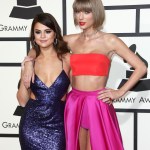 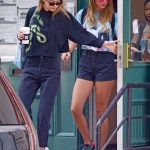 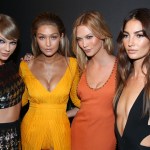 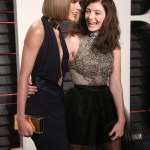 Taylor Swift has a new set of friends which includes Lorde, Sarah Hyland, and many more. So we here at HollywoodLife.com thought it would be great if we put all of Taylor’s new friends in a gallery just for you. Click to see the pics.

Taylor Swift, 24, has a brand new set of friends. She might not be BFFs with Selena Gomez anymore but she has picked up Lorde, Modern Family star Sarah Hyland, and many more. As a matter of fact Taylor has so many new friends we thought we would go ahead and put them in a gallery for you. Enjoy!

Lorde and Taylor have gotten really close over the last couple of months. Lorde even jokingly hinted at a lesbian relationship between the two in March.

During a KISS FM radio interview with Kyle Sandilands, Lorde was asked, “I see you guys [in] pictures everywhere. Are you guys together now? Not together as in lesbians, I’m not talking about ‘Ellen together,’ I’m talking about, like you guys are friendly right?”

Lorde shot back jokingly, “What do you mean you’re not talking about ‘Ellen together?’” Lorde said during the interview, taking a stand for the LGBT community. “Is there something wrong with lesbians?”

Taylor and Sarah celebrated New Year’s Eve together in January and man did they get 2014 off to a beautiful start. The two were seen goofing off in front of the camera all night.

Sarah and Taylor took one picture together where both were making “bug-eyed” expressions and wore plastic New Year’s Eve Crowns on their heads!

What do you think of Taylor’s new friends, HollywoodLifers. Let us know.