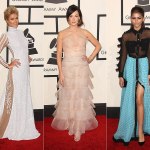 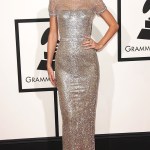 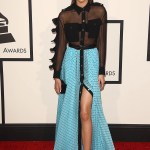 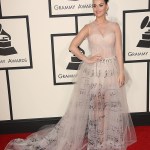 It was a huge night for Mary Lambert! She was joined by Madonna on stage while performing ‘Same Love’ with Macklemore and Ryan Lewis, and afterward she headed out with her girlfriend, ‘Voice’ alum Michelle Chamuel!

Mary Lambert is having a huge year already — and she’s crazy about her girlfriend, Michelle Chamuel. At the Universal Party after the 56th Annual Grammy Awards, the two were all over each other, and HollywoodLife.com was there to see it all! Plus, Mary beamed how exciting her new romance is!

“They were very much an item and were very close to kissing on many occasions,” an eyewitness told HollywoodLife.com exclusively. “They were always touching and talking close!”

Well, that would make sense — they’re dating! Backstage at the show, she revealed that she and The Voice season four runner-up were officially an item.

When asked about writing “Same Love,” she said she was thankful for having a great love in her life at that time . . . but that she wasn’t with her any more.

“I have a wonderful new girlfriend who is great,” Mary told Hartford’s radio station, Hot 93.7 on Jan. 27. “You might know her, she is Michelle Chamuel from The Voice. She is an incredible calming presence. She’s is brilliant, she is an incredible singer.”

While Michelle came in second on the voice behind Danielle Bradbury, she has an amazing voice — but there’s no competition between she and Mary.

“Never. She is so supportive of me,” she added. “She is here for the Grammys, and I came out for some of her T.V. stuff. We are in similar places in our careers, but taking different avenues. It is really exciting to share that!”

That’s so great! Are you shocked they’re dating? Let us know!