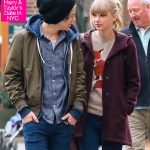 Taylor Swift was seen boarding a plane to London on Jan. 21, and the rumor mill went into overdrive that she was on her way to see her former flame, Harry Styles. But she may be rethinking her plans if she sees how flirtatious Harry has been with Harry Potter actress Emma Watson! The One Direction star took to Twitter to praise Emma for her performance in The Perks of Being A Wallflower, and things got quite flirty.

Harry, 18, tweeted Emma, 22, on Jan. 21, to tell her that he enjoyed watching her most recent film, The Perks of Being A Wallflower. Harry wrote “@EmWatson I finally saw the second half! That film gets dark, but I liked it a lot.” To which Emma, who plays Sam, replied: “@Harry_Styles yay!! So happy.”

Harry had previously gone to a screening of the film in the UK last September, but he left in the middle! Emma teased him by tweeting “So @harry_styles – when are you going to see the SECOND half of Perks of being a Wallflower ?! Huh Huh huh ?”

Harry responded: “oh hiiii.. I’m going to watch it now? On the up side, it was the best first half of a film I’ve ever seen.” Well it took him four months but at least he finally saw the full movie!

While the pair partook in some flirting, don’t expect them to start dating any time soon — Emma is currently seeing Brown student Will Adamowicz. Now that Taylor and Harry are both in London, perhaps they will reunite?

The “I Knew You Were Trouble” singer is reportedly in London to perform at two awards shows and pose for some photo shoots.

“Once she disembarked, she was met by a bodyguard and a driver who took her straight into a central London,” a source told E! News. “She is staying at a London hotel. She seemed excited to be here. She was heard saying how pretty London looked (it’s covered in snow at the moment).”

Even though Taylor seems to be quite busy, do you think she’ll make time for Harry? We hope she won’t be jealous of his flirting with Emma!

What do YOU think, HollywoodLifers? Would Harry and Emma make a cute couple? Should he try to reunite with Taylor in London?