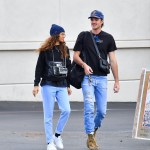 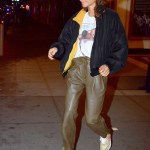 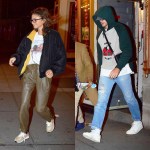 Jacob Elordi is known for playing big roles in ‘Euphoria’ and ‘The Kissing Booth.’ Now, he’s also known as the man who kissed Zendaya on the head, leading fans to wonder if the co-stars are actually dating!

Jacob Elordi, 22, is one of Hollywood’s most talented rising stars. From Euphoria to The Kissing Booth, Jacob has starred in some of TV’s biggest hits. The actor now has fans wondering if he’s dating his Euphoria co-star Zendaya, 23! The duo was seen in high spirits during a hangout in New York City on Feb. 3, and during a particularly intimate moment, Jacob was photographed kissing his co-star on the head. However, Jacob has only referred to Zendaya as nothing but a close friend and co-worker in past interviews. Here’s what you need to know to get up to date on all things Jacob.

1. He stars alongside Zendaya in Euphoria. Jacob plays Nate Jacobs, a star football player who dates Maddy Perez. Underneath his normal exterior, Nate is hiding a deep rage. Nate is widely considered to be the antagonist of the series. The first season aired in 2019 and the show has already been renewed for season 2. In addition to Jacob and Zendaya, who plays Rue, the show also stars Maude Apatow, Algee Smith, Angus Cloud, Eric Dane, Alexa Demie, Barbie Ferreira, Nika King, Storm Reid, Hunter Schafer, and Sydney Sweeney.

2. He previously dated his Kissing Booth co-star Joey King! The two young actors met while filming the Netflix movie. Jacob and Joey play Noah and Elle, who fall in love over the course of The Kissing Booth. “Well, I thought he was very cute when we first met, but it started as a friendship,” Joey told Bello magazine. “Right away we were talking about gross things with each other. But before long I started to realize, ‘Hey, I think I kind of like this person!’ It was such an interesting experience meeting your boyfriend on set because you spend so much time together and become so close so fast. We were spending 17 hours a day together, and all of us would hang out after work and watch movies together and stuff. It was great.” The couple split in 2018. They both returned to film The Kissing Booth sequel, which will be released in 2020.

3. He is an avid photographer. Jacob almost always has a camera in his hand. He’s posted a number of gorgeous shots on his Instagram page and also shot behind-the-scenes photos on the set of Euphoria.

4. He got his first film job at 17 years old. He has an uncredited role in Pirates of the Caribbean: Dead Men Tell No Tales. His next movie before The Kissing Booth, which is on Netflix now, was called Swinging Safari.

5. He’s Australian! Yes, he hails from the continent where the Hemsworth brothers, Margot Robbie, Nicole Kidman, Hugh Jackman, and more are from. Yes, he’s got a very swoonworthy accent!