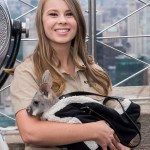 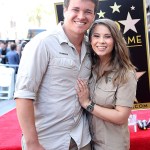 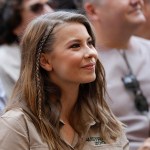 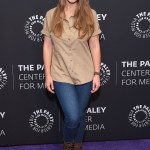 Crikey! Bindi Irwin is about to become a mom! Four months after Bindi married Chandler Powell in a private ceremony, they announced that she’s expecting. Here’s what you need to know about Chandler.

The Crocodile Hunter family is about to get a bit bigger. Bindi Irwin, the 22-year-old daughter of the late Steve Irwin, announced that she and husband Chandler Powell, 23, are having a baby! “[We’re] expecting!” wrote Bindi on Aug. 11. “It’s an honour to share this special moment in our lives with you. Though I’m still in my first trimester, we really want you to be part of our journey from the beginning of this new life chapter. We couldn’t wait to share the news as this beautiful little being has become the most important part of our lives.”

“You’re going to be the best mother,” Chandler wrote on Bindi’s post, before sharing the announcement on his own Instagram. “Becoming a dad is the highlight of my life. I cannot wait to embark on this new adventure and life chapter with my gorgeous wife.” The pregnancy comes four months after these two kids tied the knot. Bindi and Chandler were married on March 25 in a small ceremony, since the COVID-19 pandemic scrapped their initial plans for a larger, more formal wedding. Now, the couple will have to start prepping for their incoming baby. As they do, here’s a refresher on the man who won over Bindi’s heart.

1. Chandler’s American. While Bindi Irwin, is practically Australian royalty, she’s not married to a man from her native “land down under.” Chandler is an American out of Seffner, Florida. He attended the University of Central Florida, where he reportedly majored in marketing. As of 2018, he relocated down to Australia to live with the Irwin family.

2. He’s a former professional wakeboarder. As a child, Chandler discovered a love for the sport of wakeboarding. He began to compete professionally at the age of 15 and earned several sponsorships that helped him compete around the world. However, it seemed he gave it up in 2016, as he hasn’t raced since then. Currently, Chandler works at the Australia Zoo in Queensland with Bindi. He’s also an active member of the Wildlife Warriors program, which was founded by Steve and Terri Irwin in 2002.

3. He still loves extreme sports. While Chandler is no longer pursuing a professional wakeboarding career, he hasn’t given up his need for speed. He, along with Bindi, remains fearless. He loves to go diving off of waterfalls, and he’s a surfer (which makes sense, since Australia is renowned for its surf.) Before he fell in love with the water, Chandler was a skater kid, as he once posted a #TBT that showed him picking up skateboarding when he was just a toddler.

4. He met Bindi in 2013. Wakeboarding brought Chandler and Bindi together. While down under for an event in 2013, Chandler popped into the Australia Zoo. “It just so happened that Bindi was giving tours that day,” he told People in 2018. “I’m like, ‘Wow, she is amazing.’ “The two “hit it off right away,” and he got her email address afterward. They continued to stay in touch, and the rest is history.

5. He has the family’s blessing. It appears as if the Irwin family is excited to call Chandler one of their own. Bindi revealed that her brother, Robert Irwin, gave his stamp of approval on her relationship with Chandler. “My brother approves,” she said ahead of a taping of Dancing With The Stars in 2015. “I don’t know who loves [Chandler] more – me or Robert.” Robert also walked Bindi down the aisle when she married Chandler.