Bindi Irwin and Chandler Powell are married, she confirmed on Instagram! Less than a year after they got engaged in July 2019, Bindi and Chandler tied the knot on March 25, 2020 at Australia Zoo. The nuptials came amidst the coronavirus pandemic. Bindi walked down the aisle just hours before Australia’s ban on weddings of more than five people went into effect. Aerial footage of the venue showed a wedding set-up, with flowers and an archway, as well as people huddled under an umbrella to avoid being photographed while walking inside. Bindi then took to Instagram to share more about the nuptials.

“We held a small ceremony and I married my best friend,” she wrote. “There are no words to describe the amount of love and light in my heart right now. We’ve planned this beautiful day for nearly a year and had to change everything, as we didn’t have guests at our wedding. This was a very difficult decision but important to keep everyone safe. We wish all of our friends and family could have been there with us, however it’s lovely that we will be able to share photos and videos.” Of course, Bindi’s mother and her brother, Robert, were among the very few attendees, she added in teh caption.

The Australia Zoo is quite a special place for Bindi and Chandler, as it’s where they met (in 2013) AND where they got engaged six years later. Chandler, who was previously a wakeboarder, now works at the establishment, too. Of course, it was only fitting that the couple got married at this location! Ahead of her wedding day, Bindi was clearly thinking of her late father, Steve Irwin, as she took to Instagram to share a touching tribute to him on March 24. 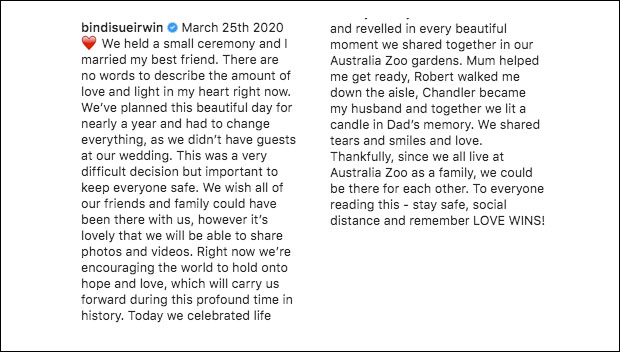 “Thank you for being my guiding light,” Bindi wrote, alongside a throwback photo with her father. “You’re always with me.” Steve, who was also known as the Crocodile Hunter, died in Sept. 2006, when Bindi was just eight years old. However, she, her mother, and brother, Robert, have helped keep Steve’s memory alive. Robert walked Bindi down the aisle at her wedding, and the family lit a candle in Steve’s memory.

Bindi and Chandler met while he was in Australia for a wakeboarding competition in 2013. He visited the Australia Zoo during his trip, and Bindi happened to be there giving tours. He got her email address so they could stay in touch, and the rest is history!