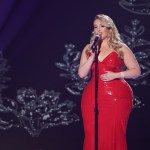 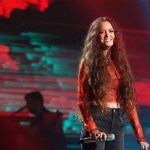 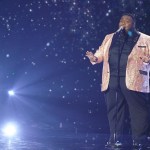 Just one week after Cecil Ray Baker was eliminated from ‘American Idol,’ he’s been charged with burglary for allegedly breaking into his ex-girlfriend’s home.

Good things didn’t happen for Cecil Ray Baker following his elimination from season 19 of American Idol. Just one week after being sent home, he allegedly tried to break into his ex-girlfriend Maria Lopez‘s house in Texas and allegedly hit her on her left cheek, according to local TV new station KXXV. Cecil, 20, has been charged with burglary of habitation — a second degree felony — and was released the same day on  $15,000 bond. Rockdale, TX police officers responded to Maria’s home after a 911 call on Saturday, Apr. 17. She said her ex Cecil tried to break in through the back entrance of her home after she refused to let him in the front door. We have five things to know about Cecil.

Cecil claims to be a loving dad

He devoted a Hollywood Week performance during Idol in March to his two-month-old daughter Emilia Jade. “My daughter, she’s my lifeline. I plan to give her the life I never had. I wanna prove to my daughter that just because you grow up in a small town doesn’t mean you can’t have the biggest dreams. Anything’s achievable,” he said before taking the stage.

In a TikTok video to her 37.5K followers on Apr 16, Maria wrote, You really had everyone fooled,” and included a clip of him talking to a local TV station where Cecil claimed all he thought about during the competition was his family and daughter. “Then the day came when you cheated on me and chose the other girls over us,” she continued, showing text screen grabs alleging cheating then wrote, “I did everything to keep us together even when you tore me apart. I deserve better after everything you’ve put me through and yet what you continue to put me through,” while showing a photo red scratches on her forehead. In the caption, Maria wrote, “People aren’t who they always seem to be on TV. I’m tired of always being silenced. You even denied my daughter being yours #cheater #americanidol #fyp.”

People aren’t who they always seem to be on TV. Im tired of always being silenced. You even denied my daughter being yours #cheater #americanidol #fyp

After he was eliminated from Idol, he shared and Instagram selfie with the caption “My American Idol journey may have came to an end.. But I couldn’t be more grateful for the path I’m on now thanks to everyone that believed in me! My Idol experience was life changing and I’ll never forget the memories and friends made.. Thank you all, I can’t wait to share my creativity with the world #singer #country #music #countrysinger #idol.”

His Instagram page is filled with videos of him playing the acoustic guitar and singing along to songs by country artists like Morgan Wallen, Cody Johnson and Koe Wetzel.

The ‘American Idol’ judges had high praise for Cecil

He was deemed the “country Justin Bieber” by judge Katy Perry, and actual country superstar Luke Bryan said during Cecil Ray’s audition that he was the “best country singer” of the season. While he made it to the top 24, that week he had a rough performance and got cut by viewers before the final 16.