After ‘Tiger King’ captivated audiences early on in the COVID-19 pandemic, Netflix announced that a sequel series is on the way!

Rejoice all you cool cats and kittens! Netflix announced that a sequel to its viral docu-series Tiger King: Murder, Mayhem, and Madness would hit the streaming platform soon in a Thursday September 23 video. A teaser for upcoming true-crime programming revealed that Tiger King 2 is coming along with other fresh thrillers like Bad Vegan, Trust No One: The Hunt For The Cryptoking, and The Tinder Swindler. Before you catch up with Joe Exotic, 58, and the gang, here’s everything that you need to know about Tiger King 2.

It’s hard to deduce what exactly will come up in the sequel series, based off of Netflix’s very short teaser. The clip shows some familiar faces and hints at the type scandal that could come up in season 2. There’s a bust wearing one of Carole Baskin‘s, 60, iconic flower crowns. There’s videos of tourists playing with baby tigers, a clip of Carole walking down a hall in a blazer, a billboard offering a reward for anyone with knowledge about who killed Carole’s ex-husband Don Lewis, and of course Joe behind bars. There’s also a clip of Jeff Lowe, 56, being interviewed, police looking like they’re entering one of the zoos, and a Joe Exotic jet getting ready for takeoff. The trailer ends with a portrait of Joe behind the bust, and the words “The truth is unbelievable” flash across the screen.

Carole Baskin Is Not Returning 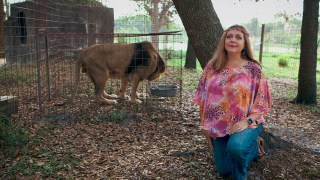 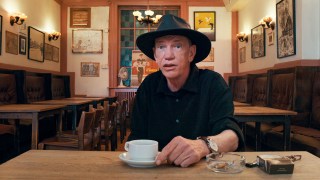 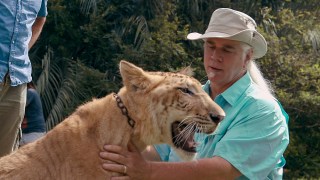 The Big Cat Rescue founder hasn’t been shy about the fact that she wasn’t pleased with the outcome of the original Tiger King. Carole explained that she thought that the series would highlight how animals are mistreated in a December 2020 interview with The Guardian, but instead she received harassing phone calls after the documentary aired. “Every time I answered the phone, it was somebody screaming threats and saying they wanted to kill me, they wanted to kill my family, they wanted to kill the cats. Our lives were just a living hell for the first three months,” the former Dancing With The Stars contestant said.

With the announcement of the sequel, Carole made it clear she’s not interested in taking part. ” [Director and producer] Rebecca Chaiklin said she wanted to ‘clean the air’ about what they did to me in Tiger King. I told her to lose my number,” she told Fox Business on Thursday. “There is no explanation for such a betrayal and false portrayal.”

Joe Exotic Is Still In Prison

Despite numerous requests for presidential pardons, the ex-G.W. Zoo owner, whose real name is Joseph Maldonado-Passage, is still in jail for attempting to hire a hitman to kill Carole. After originally being sentenced to 22 to 27 years in prison in January 2020, Joe was re-sentenced in July 2021, where a court ordered his sentence fall between 17.5 and 22 years, via The Associated Press. To make matters worse for Joe, his husband Dillon Passage, 26, announced that he planned to divorce the convicted felon in March 2021. “This wasn’t an easy decision to make but Joe and I both understand that this situation isn’t fair to either of us. It’s something that neither of us were expecting but we are going to take it day by day,” Dillon wrote in an Instagram post.

Tigers Were Seized By The Feds

Joe isn’t the only Tiger King subject that faced legal troubles. Jeff Lowe, who took over as owner of the Tiger King Park after Joe, had a run-in with the U.S. government in May 2021, which saw the Justice Department seizing 68 big cats from the zoo, including tigers, lions, lion-tiger hybrids, and a jaguar. The seizure was “pursuant to a judicially-authorized search and seizure warrant, for ongoing Endangered Species Act (ESA) violations,” via a Justice Department press release. Jeff and his wife Lauren were also arrested in June for D.U.I.s, via People.

One Former Zookeeper Has Died

Since Tiger King became a sensation, former zookeeper Erik Cowie unfortunately died on September 7 at age 53. While his cause of death isn’t known, he’d been found to have drank excessively and a big bottle of vodka was found at the scene of his death, according to TMZ. Joe mourned Erik’s loss in an Instagram post. “I did everything I could to help him and save him from himself and he turned on me for fame. And money. There are a couple others headed down the same path. RIP Erik,” he wrote in a caption. Erik may still appear in the sequel, because the sequel was filmed in 2020 and early 2021, according to CNN.

When Is Season 2 Premiering?

While a release date hasn’t been set, Netflix tweeted that the show “is coming back this year” and “promises just as much mayhem and madness as Season 1!” It’s certainly exciting that the show will come back, given the impact that it had when it first premiered, including inspiring a bunch of celebrities to don Tiger King-themed costumes for Halloween.