When former President Donald Trump dropped a list of over 140 people getting presidential pardons or commutations during his last hours in office on Jan. 20, 2021, Netflix’s Tiger King star Joe Exotic was not among the recipients. His nemesis Carole Baskin. — who Joe allegedly hired at hitman to kill — says she’s thankful that the former exotic zoo owner didn’t get a presidential pardon. The former Dancing with the Stars contestant shared her feelings in a brief interview with TMZ.

“If I understand the notice I got from the prison system, he’s already gotten another month added to his sentence by not obeying prison rules,” Carole, 59, told the site. She added, “If Joe really had a change of heart, he could do what Mario Tabraue did to lessen his 100 year drug trafficking conviction to 12 years by turning state’s evidence against the other animal exploiters.” Mario also owned a big cat sanctuary, but used it as a drug smuggling front. He was convicted on racketeering charges in 1989 and sentenced to 100 years in prison, but only served 12 due to his cooperation as a federal informant. 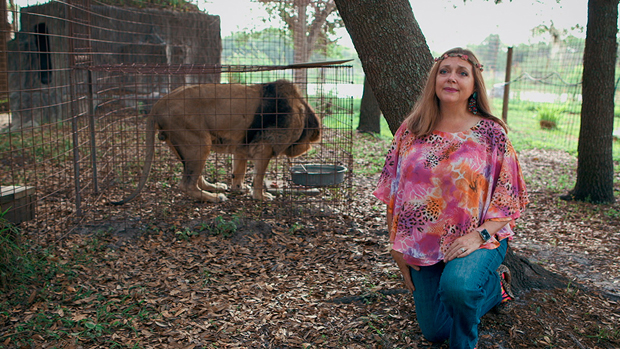 Carole Baskin as seen at her big cat sanctuary in Florida. Photo credit: Netflix.
Joe — real name Joseph Maldonado-Passage — was sentenced to 22 years in prison on January 22, 2019, after a federal jury convicted him on two counts of hiring a hit man to murder Carole at her Florida home and 17 federal charges of animal abuse, including nine counts of violating the Endangered Species Act for killing five tigers at his own zoo, and transporting other big cats and cubs across state lines for sale. 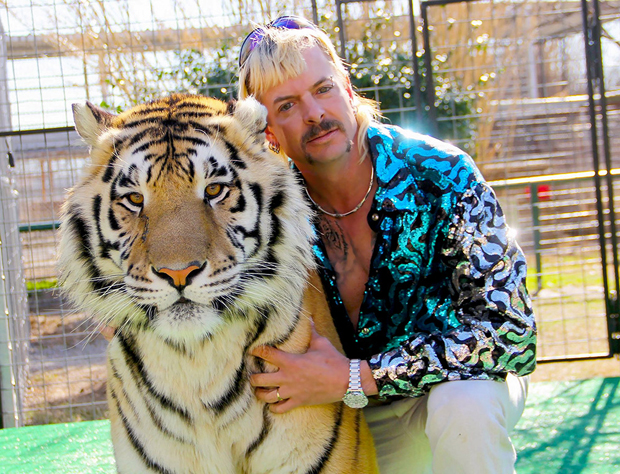 Tiger King star Joe Exotic as seen in the Netflix docu-series with one of his big cats. Photo credit: Netflix.

Openly gay Joe was furious that Trump snubbed him on his pardon list, which included rappers Lil Wayne and Kodak Black, along with political cronies including Steve Bannon and  Elliott Broidy. He claimed that Trump’s son Donald Trump Jr. used him for publicity by dangling to possibility of a pardon in Apr. 2020 when Tiger King had become a Netflix sensation. 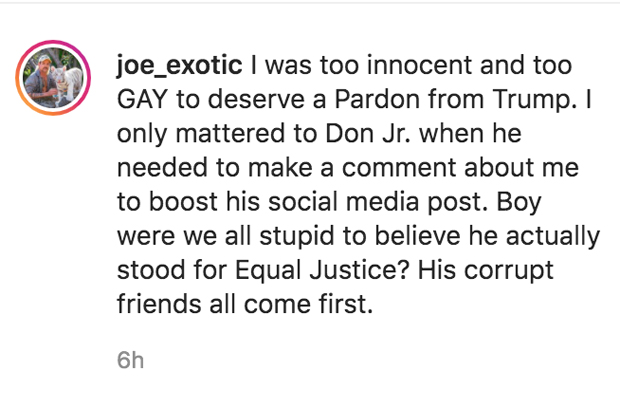 “I was too innocent and too GAY to deserve a Pardon from Trump. I only mattered to Don Jr. when he needed to make a comment about me to boost his social media post. Boy were we all stupid to believe he actually stood for Equal Justice? His corrupt friends all come first,” Joe relayed to his team, which posted it to his Instagram page on Jan. 20.

A reporter asked Trump during an Apr. 8, 2020 COVID-19 briefing if he had any interest in pardoning the jailed Netflix star.  “I know nothing about it…he has 22 for what? What did he do?” Trump asked the reporter. He then asked the correspondent, “You think he didn’t do it? Are you on his side? Are you recommending a pardon?” before saying, “I will take a look.” The reporter noted that his sonDon Jr. has already semi-joked that he was going to advocate for Joe’s release. The former zoo owner even wrote a letter to prison reform advocate and friend of Trump Kim Kardashian in Dec. 2020, begging for her help in getting the president to pardon him. But none of his efforts were successful and he remains in a Texas prison.